Updated 25th July: It seems that the deal has finally gone through and Google has bought Twitch for $1bn. Here’s our analysis from when the deal was first rumoured to explain what on earth Google wants with it.

The reports come from Hollywood trade magazine Variety, who report that it is basically a done deal. That said – the deal could potentially be derailed if American competition regulators decide to get involved, and decide that YouTube already controls too much of the online video market, and thus block the acquisition.

But the fact we’re talking about it is remarkable – just why would Google/YouTube want to buy Twitch?

1) Take out a competitor in online video?

For the uninitiated, Twitch is a live streaming website that focuses on video games streaming. That’s right – whilst the idea of tuning in to watch other people play games may seem bizarre to older people it is actually ludicrously popular. According to the Daily Dot, last year the service had 45 million users who watched 12 billion minutes of video. That’s each user watching just shy of two hours of video every single day. 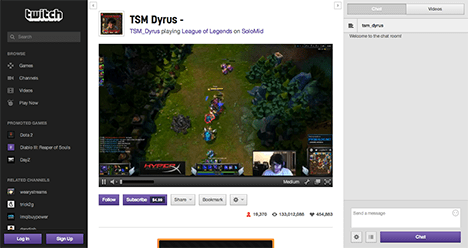 To put this in perspective – as I write this there are 15,000 people watching some guy play League of Legends… and that’s at 8:30am on a Monday morning, whilst America is asleep. If you want to scare the old media… that’s about on-par with what the new London Live TV channel has been getting (and this is just some bloke, and not a multi-million pound company).

The case for Google is pretty straightforward: all of this viewing is millions of hours spent not watching YouTube. Whilst YouTube is still the 800 pound Gorilla in the room, Twitch isn’t insignificant. Even if you discount it as just videogames streaming, imagine, for a moment if Twitch was to suddenly flip the switch, and announce that it was allowing users to stream any sort of content… that’d be a big challenge to YouTube right there.

Google will want to take out one of their biggest challenges to video domination.

The Playstation 4 controller has a “Share” button built into it. Both the PS4 and the Xbox One can live stream to Twitch. If Google can close this deal then both consoles essentially have YouTube baked right into their products. This means that whatever happens over the next few years, YouTube would have a foothold on the two biggest console gaming platforms. Sure, Sony and Microsoft if they were unhappy with the deal could try and take streaming away… but would they really want to incur the wrath of gamers?

Twitch is massively popular amongst young people and teenagers. Looking at the demographics isn’t hugely indicative, apart from that people will college and higher qualifications are under represented – suggesting that young people are indeed in the ascendence on the site.

Of course, an easier way to figure this out would be to actually go and watch Twitch, where you’ll inevitably see a 20 year old kid with 20,000 viewers as he (it usually is a he…) plays Call of Duty.

Unsurprisingly too, Minecraft is one of the most popular games to stream on the platform – and that game is essentially the 21st century equivalent of crack-cocaine for young people.

Buying Twitch would give Google another platform through which to reach teenagers, for whom traditional media (and even ‘modern’ technologies like email) are old fashioned and ignored.

Perhaps Google is interested in the live streaming technology behind Twitch? Whilst YouTube (and Google Plus) have for some time been able to live-stream, it is not a hugely popular feature. When users think of YouTube, they think of pre-recorded videos, not live stuff – whereas Twitch is live broadcasting.

Twitch could also conceivably have developed technology to make its streaming better – perhaps Google will also be interested in the code and the people who wrote it?

5) Stop competitors from buying it?

Finally, the question really is “Why not?”. With Twitch remaining an independent company it was ripe for the picking by a competitor. Both Sony and Microsoft could have been interested now that the service forms such an essential part of their console offerings. Even a company like Facebook or Yahoo might’ve been interested – both have been making (relatively) recent acquisitions to diversify their portfolios (Yahoo buying Tumblr, Facebook buying… umm.. Oculus).

So given Google can easily afford it… why should it not splash out and protect itself?