Screenshots showing off a new Google feature built to provide World Cup fans with information on match scores, have led to speculation that the next version of Android could make significant changes.. 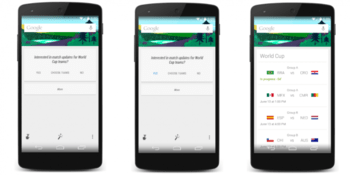 Google sent the above image in a tweet, and note that the Android system clock is set to 5:00. This could just be related to the football matches featured, but the tech giant has been known in the past to provide its fans with a little of a tease with such updates.

This can be compared to every Android release since 2.3 Gingerbread, when Google provided the press with screenshots showing the official Android clock as set to 2.30. And currently, devices sold through the Play Store display system clocks that read 4.40, clearly aimed at spreading awareness of the fact that they come with 4.4 KitKat pre-installed.

With version numbering, the general rule is that when the number leaps to a new digit – rather than just incrementing after the decimal places, it suggests that there could be more significant changes than, say, between versions 4.3 and 4.4.

This would also tally with rumours of a future version of the mobile operating system having a larger focus on Google’s Chrome internet browser and built-in Search application.

Perhaps not coincidentally, Google’s I/O conference kicks off in a couple of weeks time – perhaps this is when the company will confirm what we can expect from the next version?