If you want an iPhone, there’s only one place you can go: to Apple. Same phone, same features, same apps – a consistent, if familiar experience. With Android meanwhile it is more like the Wild West. Though Google own the operating system the unlies it, every vendor is able to make it their own, in their own special way. Which can be good for the lesser players like Huawei. 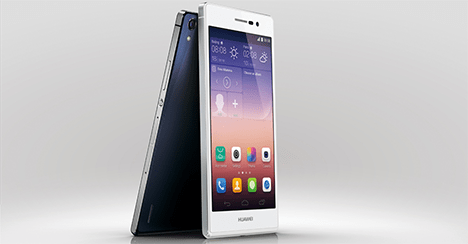 Whilst a giant in its native China, the company is less well known on western shoes – going as far as to produce a video showing people how to pronounce the company’s name:

Spoiler alert: It’s “Wah-Way”. I had no idea either.

So given Huawei are starting from a relatively small starting point, how can it convince users to switch from rival companies? With the Ascend P7, it has a new flagship phone: does it do enough to stand up to the Galaxy S5, HTC One M8 or the Xperia Z2? Read on, to find out more.

The P7 is a big phone if you’re stepping up from something more conventionally sized – with a 5″ display, and dimensions of 139.8×68.8×6.5mm, it is around the same size as Google’s Nexus 5 (and, incidentally, the iPhone 6, if the rumours are to be believed).

The screen itself is vibrant and bright – able to display full HD at 1080×1920 pixels with a sharp 441 pixels per inch – well surpassing the arbitrary Apple benchmark of 300ppi for a “retina” display.

The build quality of the device is good – it certainly feels solid. The body is plastic, but there is a metal trim around the edge.

It perhaps isn’t the comfiest device to hold in the hand – but then, how else are you going to accommodate the large screen?

Inside the phone is nice and speedy too: its powered by a quad-core 1.8ghz Cotex-A9 processor and 2GB of RAM. As is essentially standard, there’s 16GB of built in storage, which is expandable to up to 64GB by Micro-SD.

The cameras are pretty decent too: Huawei have packed in a 13 megapixel rear-facing camera, which can shoot in 1080p at 30fps… and perhaps more intriguingly, the front-facing camera is a massive 8 megapixels. So if you like taking selfies – this could be the phone to get. But more on that in a moment.

One thing that mustn’t be forgotten is the battery – and as far as I can tell, the P7 battery is superb. “Superb” compared to other phones, rather than the Nokia 3310s of old, I hasten to add.

Charging overnight, it is possible to use the phone a moderate-to-heavy amount for large swathes of the day, and only as you’re going to bed does the charge seem to dip to a point where you might want to consider charging.

Admittedly, in making this comparison I’m coming from a low bar – my usual phone is an aging iPhone 4S, which now has a battery so battered that it’ll last may four hours, and is a device that I’ll have plugged in whenever I’m near a socket. But even on its own terms the P7 performs well – I used it to tweet during an all-day conference last week and never once worried about two much screentime/activity wasting energy.

The P7 runs the latest version of Android, KitKat – but with the addition of Huawei’s custom “Emotion” user-interface. Essentially, it removes the “app drawer” approach Google took, and makes apps appear on pages of the home screen in much the same way that iOS does.

Frankly, I’m not sure why they bothered as it is uglier than the default Google interface.

Whilst I described above how the battery performed well, so I never had to worry about charging up, the software had other ideas. Running in the background on the phone is an over-zealous battery monitoring app. The idea is a good one: monitor apps running in the background and warn the user is if the battery is being drained by anything specific. There’s even a home screen widget that will show you what percentage of processing power was being used, and on a tap will “clean up” the running apps on the phone.

Unfortunately whoever configured it set it to be as completely paranoid as possible – where after installing a couple of apps and running them a battery warning icon will appear in the notifications. This just made me massively anxious.

The rest of the software is very ordinary… with the exception of the camera. Which is hilarious.

Most manufacturers offer different effects and enhancements to improve your pictures, but I haven’t seen any quite like Huawei.

As you snap a selfie, you’re offered a slider to control the “beauty level” – which essentially controls how soft focus the photo should be. The idea seems to be you can choose between the harsh reality of your face as is, or you can smooth things out a little. But this is just the beginning.

When you’ve taken a photo, there’s a bunch of other controls. Sure, you might be used to adjusting the contrast… but have you ever made your nose more slender?

Yes, really – there’s an option to make your nose more slender, with a slider in which you can shrink your nose to however you might want it. I’m not making this up. There’s a similar control for slimming down your entire face. 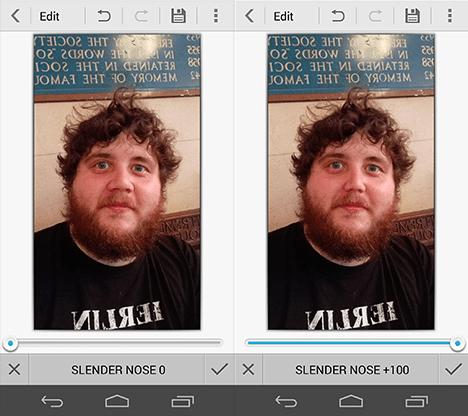 You can also make your eyes bigger, and make yourself look like you’ve just stepped out of an anime. It was at this point that I realised that I’m probably not in the target market for this product.

Perhaps most controversially is a post-production control to “whiten” your face. Apparently face whitening is a popular thing for people to do in Asian countries like China and India. Leaving aside the inevitable debates about racism and the nature of identity… I can at least confirm that it produces some funny results.

More broadly, the phone did seem to suffer some performance issues. Whilst it was nice and fast, as I installed apps there were instances when response to inputs could become sluggish. For example, swiping away notifications became a chore as my finger would swipe faster than the graphics could cope with. Similarly, the UI felt at times buggy. It’s possible to pull down the notifications drawer whilst the phone is locked, but occasionally I’d press on something, and have it load “behind” the lock screen. No problem – but when I unlocked it, the phone bugged about for a few seconds whilst it figured out what was going on. If you like the slickness of the iPhone like I do, this can be a frustrating experience.

So is it worth it? Essentially: Maybe. Apparently the P7 will retain for around £400 with a SIM card – significantly cheaper than the flagships from the likes of Apple and Samsung, so could be a good budget option, if you still want a “premium phone”.

On its merits though, if you can afford better, unless you really want a more slender nose in all of your selfies, it might be better to go for something like the HTC One M8.

One thought on “Huawei Ascend P7 Review – the only phone that can promise you a more slender nose (!)”