The wearable tech revolution, which already is dominating the scene this year, could set to become more exciting, following E Ink’s announcement that its technology could be used for both the screen and body of an upcoming smartwatch. 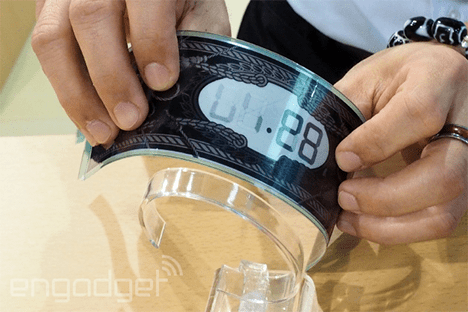 The main benefit to a smartwatch using a monochrome e-ink display would be improved battery life – much like Amazon’s Kindle.

Representatives from E Ink confirmed the news to Engadget and talked about how it would have a curved panel that would become the main body of the device.

Based on this, users of the product would have more screen real estate, enabling more data to be displayed.

What’s also rather clever is that because the ‘screen’ would cover most of the outer surface of the device, you could conceivably download different ‘strap’ designs.

Apparently, there is a prototype of this device behind closed doors, but E Ink chose not to reveal too much about it and instead just teases us with the concept.

The wearables market is getting increasingly crowded, with Google and Apple expected this year to join the likes of Samsung and Pebble in making their own smartwatches.

One thought on “E Ink working on Kindle-like smartwatch”