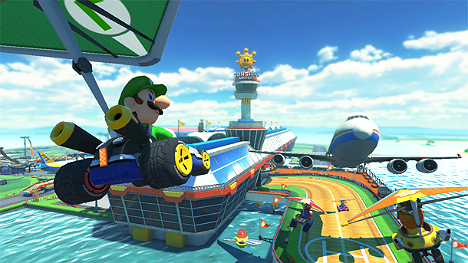 The go-kart racing game has been around now for more than 20 years. The first in the series, Super Mario Kart, was released in 1992 for the Super Nintendo Entertainment System – to both critical acclaim and commercial success.

Many gamers say that the version for the Nintendo 64 is still the best one ever released, but the early word on the latest version – Mario Kart 8, for the Wii U – is overwhelmingly positive.

Edge magazine says that it will be difficult returning to previous Mario Karts after playing MK8: “The new HD visuals are gorgeous, but Nintendo has also built on 7’s neatly interlaced mechanics and introduced a nuanced handling model to create the greatest Mario Kart yet.”

The Verge calls the game the best Mario Kart ever, saying that it finally provides some hope for the beleaguered Wii U console. “Mario Kart 8 is full of life and ideas — and it might just be the best game in the series to date.”

Over at Screenjabber, games writer Steve Boxer says that the latest iteration of Nintendo’s revered kart-racer is so good, it’s almost obscene. He says Mario Kart 8 “manages simultaneously to embody everything that made Nintendo great and everything that is currently wrong with the giant Japanese publisher”.

The Telegraph‘s Tom Hoggins also asks if Nintendo’s famous racer help reverse the Wii U’s fortunes. But like everyone else, he too thinks this might be the best Mario Kart yet.

“It might be too late to completely turn around the Wii U’s fortunes, but when Nintendo are releasing games as good as this, it may just have a chance.”

IGN says Mario Kart 8 is a beautiful, fun kart racer that introduces sound new ideas to Nintendo’s 22-year old franchise, building on the series’ most essential aspects better than any of its predecessors.

“The end result shouldn’t come as a surprise: Mario Kart 8 is the king of the mascot kart circuit, and it gave me hours of enjoyment.”

And Eurogamer‘s Simon Parkin says that Mario Kart 8 is a revelation.

“It’s undiminished by familiarity. It may be furnished with recognisable props, faces, scenes and modes – but it’s also the most vibrant home console racing game in years.”

Mario Kart 8 will be released on May 30.