A new anonymous social networking app that lets you share your innermost secrets has launched in the UK after becoming a huge hit in the US, according to a report at the Daily Mirror. 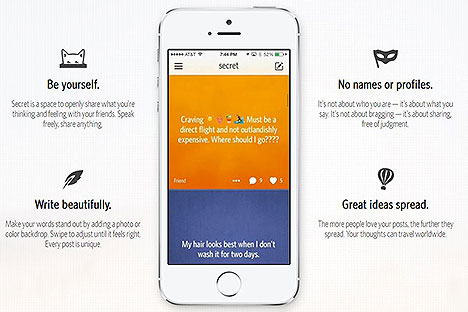 The Mirror says that the new Secret app, developed by two former Google staffers, is currently available only for the iPhone.

People who use Secret share short text and image posts with their social network but without revealing their name. As well as the UK, the app is also launching today in Ireland, Australia and New Zealand.

The app has had strong commercial success so far in the US, making $8.6 million in venture capital within two months of its release. But it has caused a stir in the tech world, when it revealed Vic Gundotra, the former head of Google+, was interviewing for other jobs days before he resigned.

And earlier this month, Nike denied claims made on the app that the team behind fitness tracker Fuelband were about to be fired. Most of the developers were later let go by the company.

As with Twitter, it is also possible to block a user so that you no longer see their secrets.

An Android version of the app is in beta and is expected to launch soon.