Rockstar have announced details of the forthcoming spring update to Grand Theft Auto Online, which – counter-intuitively – actually restores a couple of bugs in the game. 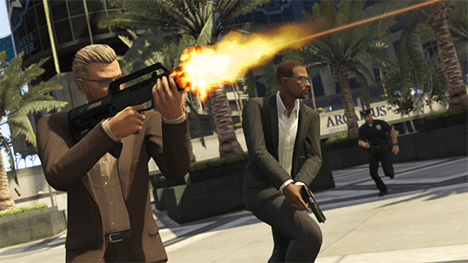 The complaints have come thick and strong from GTA players who enjoy carrying out stunts on motorbikes and bikes. Apparently the previous update fixed bugs in the physics – but though this may have created a more realistic simulation, it meant that some of the crazy stuff the stunters had been doing was no longer possible. Stuff like this, presumably:

The update will also bring with it some new features. Soon players will be able to own multiple properties (useful if you own a lot of in-game cars) and it’ll be possible to design and build your own “capture” missions. For example, choosing where to place the bad guys, what needs to be retrieved and where it needs to get to.

“The High Life Update” as it is being called will bring with it a slew of new clothing options, cars and weapons. Apparently there will also be a new metric viewable to determine the mental state of other players, to see if they’re more like Trevor or Michael.

This spring will also finally see the long-awaited launch of the GTA Online heists that can be completed with friends. Footage of one of the heists, in which players take a bank vault, leaked in February:

Finally in addition to a handful of other bug fixes, some nice additions include a “non-contact” mode for races, so other players can’t bash you off of the road, and the ability to call Lester and have him pre-emptively call of the cops for a limited period of time, for if you want to go on a senseless rampage, but not worry about the consequences.

It seems even though it is now on the last generation consoles, GTA5 doesn’t intend to get old any time soon.