Today we’re at Gadget Show Live at the NEC in Birmingham, and one of the exhibitors there is an intriguing 3D printing company called Robox, whose first products are shipping to Kickstarter backers in the next couple of weeks. Unlike an existing 3D printer, this one is aimed squarely at consumers – and might be the sort of printer that normal (or slightly more normal people) have in their homes. 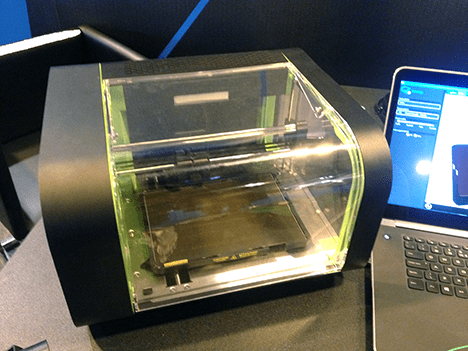 About the size of a microwave, they claim the Robox is faster than similar printers thanks to dual nozzles. This means that the printer can go over the details delicately with the 0.3mm nozzle, then quickly spray in the in-between bits with the 0.8mm.

Speed is all relative though – though it is “fast” by 3D printer standards it’ll still take several hours to print even relatively small pieces. But if you’re worried about speed then you’re missing the point… it is 3D printing them.

Though 3D, the device does share some DNA with normal printers – but luckily seems to fix the bad parts. Different materials (the Robox supports six: PLA, ABS, HIPS, Nylon, PC and PVA) are loaded through spools and come with a built in chip to let the software monitor how much is left. Apparently replacement spools will cost only £25, which seems astonishing when you consider how much normal ink for normal paper printing costs. 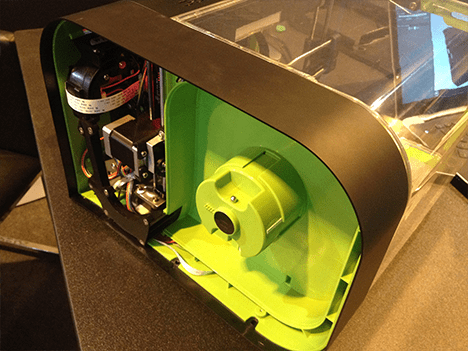 Apparently the device will be fully upgradable too – the head unit can be removed and upgraded as-and-when replacements are invented, and Robox’s people told me that this could mean heads that can carve with a knife, or even paint icing on to a cake.

The software looks pretty straightforward too – it gives you a visual representation of the base of the unit, and you just have to import your 3D object, scale it to however large you want it printed, hit print and then… well, probably go to bed and check back in the morning.

All in all it appears rather cool – and you can totally imagine them catching on amongst the sort of people who need them – think builders who might want to conjure up a specific widget. The limiting factor at the moment is probably price: At £849 it is a bit steep… especially when you consider how much Warhammer one would have to pirate for it to become economical.