Ever wondered if it was possible to carry a massive screen around in your bag? With the Dell M115HD, it has become a distinct possibility – meaning just about anywhere with a flat surface can become yours to manipulate. 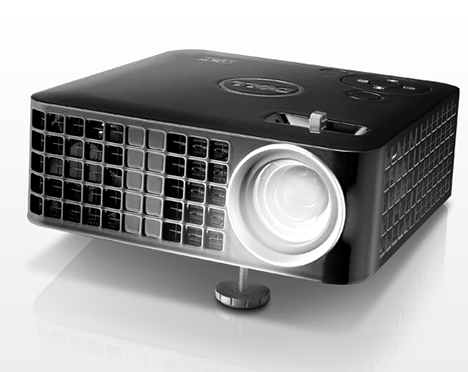 The Dell is a tiny beast by projector standards – at 4.09″ wide, 4.14″ long and only 1.34″ high, not to mention weighing in at only around 360g, which makes it truly portable. And for the size of the device, the picture it displays is pretty impressive.

Now, whilst I hasten to add I’m not an expert in picture quality – I can confirm that it works great for playing a high-speed Xbox game – with no lag, latency or blurriness… so if all you want to do is display some pie-charts in a boring meeting, you’ll be fine.

Dell reckon the projector is best optimised for displaying something between a 30″ and 80″ screen – from between 1 and 2.5m away.

When compared to my normal TV the picture was, unsurprisingly, more washed out – so this is very definitely a device to use in a darkened room. The other downside, for purists, will be that despite the “HD” label, the projector is only capable of displaying up to 720p images.

In terms of connectivity, there is plenty of options: there’s a HDMI port, VGA input, and the projector can even read files directly from MicroSD cards or USB memory inserted into the USB port.

There’s also a built in speaker – albeit a puny one, so if you want to watch the latest blockbuster on the projector, make sure you plug in some speakers or it will be like watching an IMAX film with a pair of in-ear headphones.

When used for a while, the projector will inevitably get rather warm – not least due to the powerful lamp inside – so make sure you switch it off when not using it! 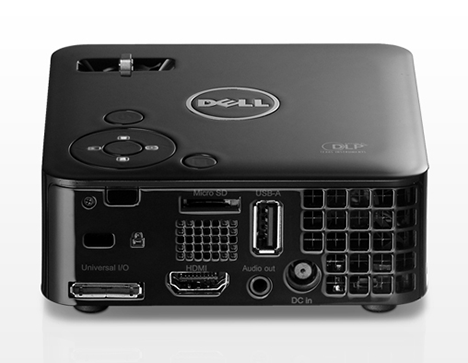 So that’s the projector in a nutshell – but what about the extras? I didn’t get to try them out but Dell are also selling a separate remote with which to control the projector (crucial if you want to navigate the on-screen menus and files more easily) and there’s even a wifi dongle available. This plugs into the USB port on the projector and your computer – and can then project images wirelessly over what appears to be a proprietary wireless connection.

Price-wise, the device clocks in at around £340 – which isn’t too bad for such a small and powerful device. It might be the cheapest possible way of getting an 80″ screen in any case.

So is it worth it? If you’re looking for a mini projector, this could be a good option – especially if portability is something that is crucial. Given how small and lightweight it is, throwing it in your bag and carrying it everywhere just in case becomes a very real possibility.