Microsoft have finally announced details of when Twitch videogame streaming is coming to the Xbox One – several months after launching on the PS4. But it sounds like it might be worth the wait after all. 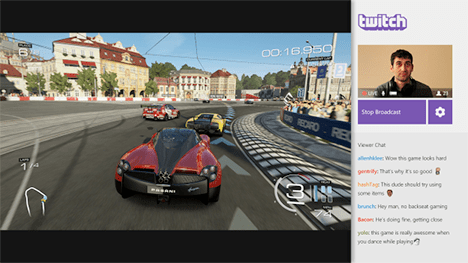 Mark it in your calendars folks – March 11th is the magic day when the update will be available for download… and probably not coincidentally, this is just days ahead of the launch of the hotly anticipated Titanfall, which is widely expected to be the first next gen blockbuster game.

Though delayed, the support for Twitch on the One appears to be deeper than the PS4, with gamers able to start a Twitch stream by simply issuing the voice command “Xbox, Broadcast”, and better still – able to jump in and game with the person they’re watching at the press of a button. And of course – because of the mandatory Kinect camera, you’ll be able to see the player at the other end throughout.

To show off, Twitch have put together this video demo, featuring some suitably attractive young people as idealised versions of their core demographic:

Now how about some TwitchPlaysTitanfall?