Yesterday at Mobile World Congress, Samsung lifted the lid on what’s inside the Galaxy S5 – before promptly sealing it again to ensure the phone remains water and dust proof (one of its new features). Despite the hype, there doesn’t appear to be any spectacular new innovations – but there’s some nice indicators as to the direction in which the industry is going, as where Samsung lead, the other companies are sure to follow. 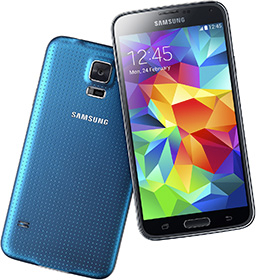 1) Health is the new battleground

All of the indications were there. Just last month there was news of Apple and Sony getting ready to fight it out on health – and now Samsung have announced the S5 will have a built in heart rate tracker and health monitoring app that will track steps taken and diet and so on.

Clearly the next generation of smartphones, and their inevitable accompanying smart watches will be touting this sort of monitoring as a key pillar of what they do – because pretty much every other smartphone function is now ubiquitous. For the less tech-savvy, why would you upgrade your old phone that can already play 1080p video and run Facebook and so on? Promising good health might just do the trick… and who knows, maybe all of this data might actually help us live longer?

2) Fingerprint scanning is here to stay

Anything Apple can do, Samsung can do… better? To keep pace with the iPhone 5S, the new Galaxy S5 (oh god, these product names are about to get confusing, aren’t they?) has a built in finger print sensor in the home button – just like the iPhone.

Apparently in addition to unlocking the phone, it can also be used for making Paypal payments online, which seems like a useful addition.

Perhaps most importantly, now the two major players feature finger print scanners as standard, surely the likes of HTC and Motorola will now how to follow, lest they be left behind?

3) Bigger IS better after all

Again, no surprises but the creep towards larger screens continues. The S5 has a near identical AMOLED 5.1″ screen compared to the 5″ S4. Whilst not hugely significant it is another indication that everything is getting bigger – which tallies with the rumours that the next iPhone will have an even larger screen… with suggestions there could even be an iPhone phablet. Despite miniaturisation usually being a virtue in tech, it turns out people really do want massive screens.

4) Smartwatches will be where the innovation is 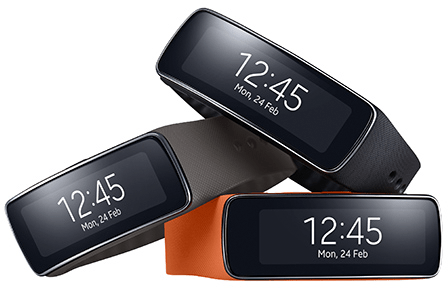 Let’s face it – we all know that the iWatch is coming – probably in November. So to preempt Apple, Samsung have announced not one, but three new smartwatches to replace the (apparently terrible) Galaxy Gear. The Gear 2 has lost the ‘Galaxy’ name and instead runs on Samsung’s own “Tizen” operating system rather than Android. It has 4GB of storage on board, and even has a built in camera. The Gear 2 Neo is much the same, but lacks the camera, and the Gear Fit has a smaller, curved screen, and obviously is aimed at the fitness market – they all feature heart rate monitors under the screen (just as the iWatch is rumoured to do so).

What’s telling about this is that not only are we approaching a point where smartwatches come of age and will become a full product category in their own right – not just a gimmicky add-on. As smartwatches are so new, they will undoubtedly take a few generations to figure out what it should be, and what should come as standard (Should smartwatches have wifi as well as bluetooth? Should they have separate SIM cards? What health sensors should be included?).

Perhaps most importantly what Samsung have done with the Gear 2 isn’t the hardware – but the software. Tizen is open source, and Samsung have released an official SDK, which will make app creation for their watches as easy for developers as creating apps for phones. This is important as it will be from the thousands of developers who make stuff that we truly learn what smartwatches are capable of, and what innovations will become standard. Remember – it wasn’t Apple that invented something as simple as “pull down to refresh”, but other developers – and this technique was then incorporated back into Apple’s own apps. It is only now that the language and visual grammar of smartwatches will be developed.

Ultimately, the S5 isn’t too revolutionary – it’s just a rectangle with a screen. (Umm, feel free to link me to this piece in a year’s time when the S5 has caused peace in the Middle East and put a person on Mars). None of the upgrades are hugely revelatory like the original iPhone was, and they are merely incremental updates: a slightly bigger screen, a slightly faster processor, a new sensor, and so on… hey, I’m not complaining – I’ll take what I can get… but wouldn’t it be exciting if Samsung (or Apple, or HTC, or whoever) would come out with something truly new and spectacular?

So should we be excited about the Galaxy S5? Absolutely – but perhaps, like tennis, we should be concentrating on where it matters – in the wrist.