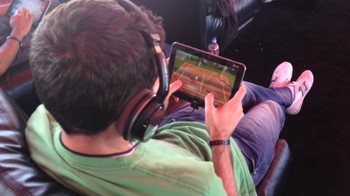 For many this Christmas it was a strange time, parents were
frantically shopping around looking for the latest iPad or Galaxy Tab for their
children rather than the Sony PS
Vita or Nintendo 3DS. But what does this mean? The end for the portable
gaming device?

It wouldn’t be surprising. After all smartphones and tablets
are becoming the jack of all trades. You can browse the internet, type up notes,
and play games that more than match their rival portable gaming devices.

Since the emergence of the mobile devices there’s been much
talk about how they could compete and even surpass the games console but the
releases of the Xbox One and PlayStation 4 have certainly proved otherwise with
record sales, and a buzz that undeniably suggests there is room for both on the
market.

On the other hand however, it’s been two years since the
PlayStation Vita hit the shelves and has sold much less than anticipated with
Sony UK’s managing director firmly placing blame on an ever changing
marketplace.

He
told VG24/7, “In all honesty, higher sales would have been what we had
hoped for.

“The market Vita entered was more complicated than it was
when the console was originally thought about and designed. Games on tablets
and phones have changed the marketplace and people can’t carry too many things
around at one time.”

Online poker is one area which highlights this, as trends suggest that there will be an estimated 164 million users who choose to use mobile poker applications provided by the big brands, such as Full Tilt Poker with a huge reduction in desktop gaming

It isn’t just the convenience though. Of course the ability
to pull your mobile phone on the bus and play free poker online is
a huge benefit, but it’s free that is
perhaps the operative word. Tablet and mobile gaming generally offer free or
games at relatively cheap prices, allowing gamers to enjoy the latest fad such
as Angry Birds, or more recently Flappy Birds, at a price which is disposable
income to most of society.

In comparison, a Vita will set you back around £180, whilst
you’re likely to pay around £20 for a single game.

Sony are trying to combat this, due to the development of
the Vita and PS4 at the same time there is set to be greater connectivity
between the two. Named Remote Play it will allow gamers to play PS4 games using
their handhold console, and even switch between playing on the two without
losing any data.

Whether this will help resurrect the handheld console it’s
unsure, but it will be a mighty climb to beat the likes of the App Store’s
260,000 or the reasonable prices of Android tablets.

In Association With Full Tilt Poker