One of the best lesser-known functions of Apple’s small Apple TV box is the ability to use AirPlay. AirPlay enables iPhone, iPad and Mac users to transmit the screen on their device to the TV – so you can share photos, videos, or even your whole screen on the largest screen in the house. It’s great for, say, if you’re planning a trip and don’t want everyone crowding around the iPad to look at the map, as you can just throw it up on to the telly.

But did you know that if you already have a Mac or a PC with a big screen, you don’t actually need an Apple TV to make this happen? A clever company called Air Squirrels have come up with two pieces of software: Reflector and AirParrot. Which work together to send and receive pictures from another machine. I’ve tested these with Reflector running on a Windows 7 machine hooked up to my living room TV – with AirParrot running on my Macbook Pro.

Reflector is the software for your screen, and costs $12.99 (£8ish) and works with Mac and PC. Once installed it’ll sit in your taskbar and listen.

If you then go to your iPad or iPhone and, assuming you’re running iOS7, swipe up to bring up the tray where you can toggle wifi/etc, you should see a new “Airplay” button – press on this and suddenly your computer screen will pop up with your iPhone display!

It’s quite bizarre to see at first – but it works. What you see on your phone will be displayed on the telly with only a split second of lag. Even the camera works.

A number of apps – such as Photos and YouTube have special built-in AirPlay functionality – and will send photos to the screen so they display nicely in landscape without any fiddling about. Brilliant. 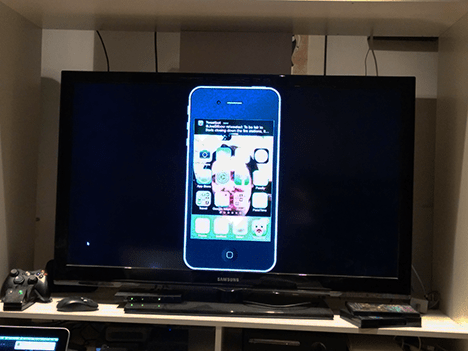 If you’re a Mac computer user, you may have also noticed the “Airplay” icon appear in the bar at the top – and yes, using Reflector you can send your Mac’s screen to Reflector for it to mirror – or you can even use the Reflector screen to extend your desktop – like if you’d plugged in a second monitor.

The only drawback here is that if you send your computer screen over, it’ll appear in a smaller window on your other computer – with a border like an iPhone. I’m not sure if this is a programming limitation or deliberate on the part of Air Squirrels, but there is one solution… 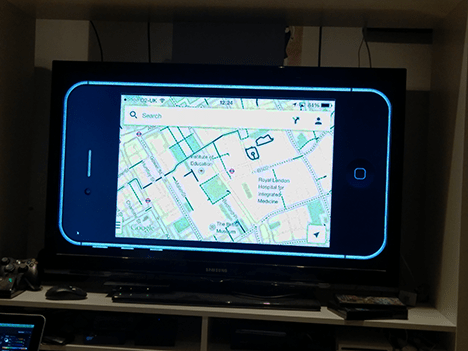 AirParrot is an app for PC and Mac that can send the screen to AirPlay receiving devices – like an Apple TV or a computer running the aforementioned Reflector software. This’ll set you back $9.99 (£6ish). If you’re a Mac user, the utility in the software in somewhat diminished as if you’re running Mac OS Mavericks (the most recent operating system update), your computer will already support AirPlay – but if you’re running Windows, AirParrot can let you join in the AirPlay fun.

There are benefits to running AirParrot even if you have a Mac. For a start, you get many more controls over exactly what happens with the transmitted picture. In preferences, you can shift the framerate, the video quality, and even adjust the underscan – perfect if you’re running it on a TV. You can even switch the display of the mouse cursor on and off. Perhaps the biggest boon though is that you can mirror or extend your desktop to the AirPlay full screen – rather than be stuck with a border.

You can also choose to stream specific apps to the other screen – so rather than have friends or colleagues see what browser tabs you have open, you can choose to share just that Excel window that – if anyone asks – you were definitely working hard on.

AirParrot can also stream audio to the TV – so you can watch a video full screen on the TV and have it come out of the big home theatre system speakers, and not the weedy tinny things in your laptop.

When trying the audio stream though, it’s fair to say it wasn’t unproblematic. When you first enable it, AirParrot has to download and install some additional drivers, and then when you try to use it… results are variable. The first few times I tried the app worked fine until the moment my computer had to play a sound – which promptly crashed the app on my computer, as well as the Reflector app running on my Windows PC, and taking out the Windows taskbar with it – prompting a restart. Other times though, after a quick restart of the app, it has worked fine.

Overall, both apps do something useful, in an easy to use way – and if you already have the kit to make it happen (ie: another computer with a big screen), then it is a much cheaper option than splashing out on an Apple TV, if AirPlay sharing is the attraction.

Let’s hope that with future updates Air Squirrel can iron out the audio support – but other than that, I’d thoroughly recommend it. At £13 for both, you can’t really go wrong, can you?