The iPad Air better be careful – there’s a stalking horse on the horizon. Amazon’s Kindle Fire HDX 8.9″ isn’t just for reading books. This latest and largest incarnation shows that Amazon are serious about making waves in the tablet space – but is it any good? Read our review to find out. 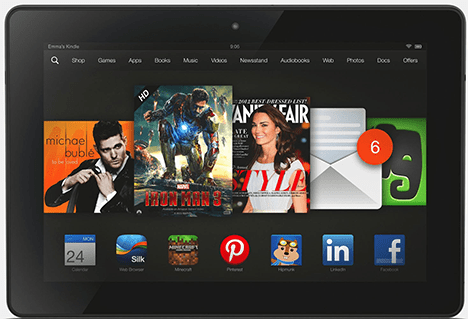 When you first pick up a Kindle Fire HDX 8.9″ the first thing to do is find the “on” button. Unlike most other tablets, the switches for on/off and volume controls are on the back of the unit, and not the edges – which actually makes a lot of sense ergonomically.

The device itself certainly feels fairly solid – and is pleasant to hold. Nor is it too heavy. Under the hood things are looking good too: it’s got a nice-and-powerful 2.2ghz Snapdragon processor inside, along with 2GB of RAM – with storage options available as either 16, 32 or 64GB. The display appears crisp – which is no surprise when it runs at 2560×1600 – with a pixel density of 339ppi – even better than the iPad. Amazon are serious about this device taking on the Apple behemoth. The rear camera is a decent 8 megapixels – and the front camera is even 720p HD, which will be nice for Skype and the like.

Once you’ve powered on the HDX for the first time, and the screen has lit up, you’re greeted with a tablet that is already configured for your Amazon account – brilliant. Then it is just a simple case of connecting to your Wifi, and you’re away. If you’re already a Kindle user, it’ll load up all of your book purchases right there in the middle of the screen. 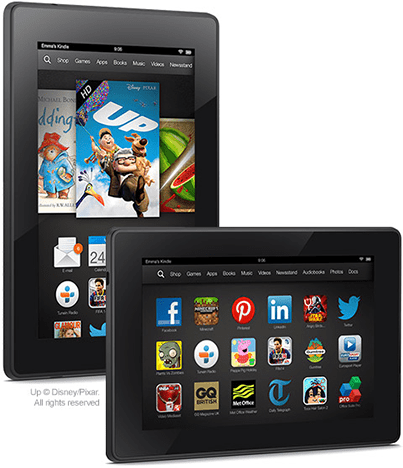 If you’ve used an Android device before, a lot will be familiar… but it will be eerily different. It’s Android, but not as you know it. The big difference is that there’s nothing Google to be found: no apps for YouTube, Gmail, Google Calendar and everything else – though you can still access them through the built in web browser. If you’re a big user of Google’s services, this will come as a bit of a shock. I was certainly left wondering how do people function without Google hardwired into their devices?

The lack of Google influence is interesting – and shows a completely different direction for Android. One nice innovation is that right in the middle of the screen is a coverflow-style list of what you’ve looked at on the device most recently, to make skipping back easily. So you can easily jump right back into that book, or back to those photos.

The device is, of course, great for reading. All of your books are there and Amazon’s Kindle app does the job very well indeed – with coloured highlighting, social sharing and all of that sort of thing taken care of. Now it’s just a case of sitting down and reading that worthy tome you’ve been meaning to tackle… rather than checking your tweets again… and maybe playing a bit of Candy Crush. Ahem.

What’s clear with the Kindle Fire is that you’re constantly plugged into Amazon ‘app’. Being the retail experts your expect them to be, there are no built-in parts of the device that are not bolted on to the store. Along the menu at the top are the different types of content you may want to access: Books, Videos, Games, Apps and so on – and clicking one not only takes you to the stuff you have on your device, but also prominently features links to the store. Even the lock screen is an advert. What’s clear is that this device is all about consuming content.

Crucially, the app store seems well stocked – Google excepted. It seems that most of the major apps also have a presence on the store now: from Facebook, to Spotify, Sonos and Duolingo, to name four I find essential. Even Amazon’s arch-rival in video (don’t forget they own LoveFilm), Netflix, puts in an appearance. 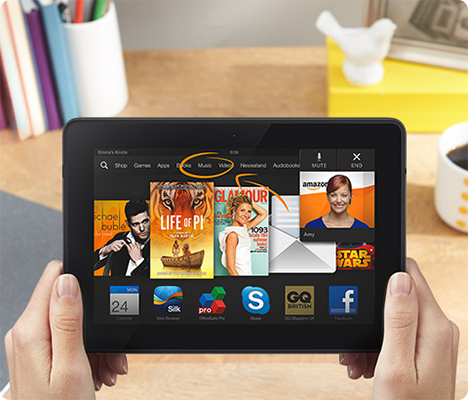 Perhaps this latest Kindle Fire is best known for its innovative help function. The “Mayday” button will connect you directly with a helper in one of Amazon’s call centres, complete with video chat – so you can see them and they can see you. The Amazon agent can even take direct control of your tablet – and either do stuff for you, or draw on the screen the show you what to do.

I tried this out – and within seconds was connected to the poor bloke manning the Mayday station (I like to imagine an alarm goes off at Amazon HQ), before disappointing him by telling him that I didn’t really need any help, but was just seeing how it worked. Kindly though he showed me how he can draw on the screen. It wasn’t quite as slick as the TV adverts for this feature you might have seen (the video lagged a bit) but it certainly worked. Could it be a must-have feature for technology of the future? Whilst people in some corners have criticised the idea because the goal should be to build software that is easy to use, not an elaborate help system for when it fails… but I’m fairly certain that anyone reading who is under the age of 40 will appreciate anything that might stop them being their family’s de-facto tech support.

So is the Kindle Fire HDX worth it? The 8.9″ version is clearly gunning for the iPad Air and the basic 16GB Air costs £70 more than the basic Kindle Fire model. It is certainly a hugely accomplished Android tablet – it is both fast, feature packed and it feels like a premium product. The lack of Google apps is annoying if you’re a Google power user – but you can probably get by.

Perhaps this is the only thing that gives it a flash of unprofessionalism: search for YouTube or Gmail in the app store and you’re hit with the same problem Windows Phone devices have. Nothing “proper” turns up, and instead you’re left with a bunch of knock-off third-party apps to provide an ersatz Google experience.

But if you can live with this, the Kindle Fire HDX 8.9″ is a very good choice for an Android tablet. If you’re a big user of Amazon’s services – with a LoveFilm subscription and a busy Kindle library, then you can’t really go wrong.