Google Now, the clever cards that seem to know what you’re doing before you do are coming to Mac and Windows computers via Google’s Chrome browser, according to reports on the Google Operating System blog. 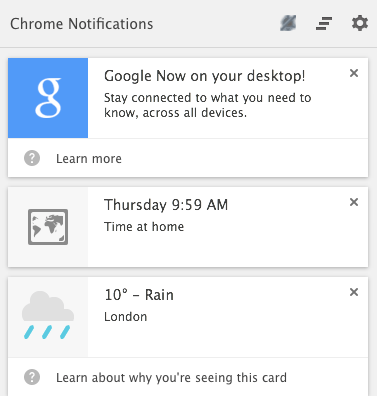 Google Now has been available for mobile for a while now – forming part of the Google Search app for iPhone, and also available on Google’s own Android operating system. The way it works is by looking through all of the data that Google has on you – your emails, your calendar and so on, and displaying relevant information in a timely fashion through little pop-up “cards”.

For example – if you’ve got a flight confirmation email in your inbox then Google will figure out all of the details from it – then just before your flight pop up with a reminder to get to the airport, complete with routing options on the fastest way to get there.

Similarly, it can do everything from remind you of friends’ birthdays, to sports scores to track parcels.

According to the blog, this feature is included with the latest developer-only overnight build of Chrome – nicknamed Chrome Canary (34.0.1788). This strongly suggests that it will eventually be rolled out in the normal version of Chrome used by you and I – once they’ve finished testing it. Apparently it will even appear as a notification icon on your taskbar in Windows or menu bar on Mac, so you can receive Now notification even when not in your browser.

We’re not sure when this will finally go live – but will update you when we do.

This news follows hot on the heels of more Chrome news – in which Google seem to be trying to take control over Windows 8. Couple this with today’s news and it certainly seems as though Google have desktop in their sights.