As we slide into Christmas, suddenly tradition becomes important. It’s a time when we go back to our families, and try to figure out what grown adults can buy each other that they won’t have just bought for themselves anyway. 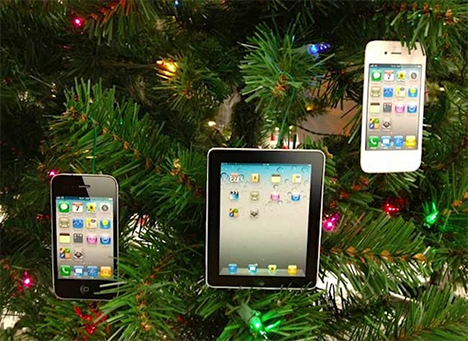 You may have spotted this sarcastic post about Virgin Media’s lame attempt at using the proliferation of technology to muscle in on the news at Christmas. The implication in their premise – and something they’re gently trying to subvert – is that Christmas isn’t for Facebook and Twitter – but is instead for “IRL”, or “in real life” as the old people call it. I know Christmas isn’t a time for religion, but to this I say “God, no!”. Technology is what makes Christmas bearable.

In the dark old days, Christmas meant families getting together and talking about how bleak the war was – or how much coal they’d eaten for breakfast. To pass the time, they’d all sing around the piano. Can you imagine something quite so hideous?

Mercifully with the invention and popularisation of television there was an alternative to this excruciating spectacle: now families could technically spend time together but do it in blissful silence whilst watching Morecambe and Wise. When you start to see newspaper columnists lament the lack of a traditional Christmas and the media distractions this year – just remember that in 1986 thirty million people – more than half the UK population at the time – watched Den and Angie get divorced on Christmas Day Eastenders, just to avoid hearing yet more of grandad’s opinions on immigration.

So the march of technology has not really changed anything – it has merely diversified the ways we distract ourselves. In fact, in many cases technology is making us more sociable – rather than being stuck inside with a handful of relatives we can now easily share the Winterval joy with our friends and people many miles away, using social media and modern communication tools.

My girlfriend is Canadian, and will be spending Christmas in Britain with me and my family – but what she’ll be able to do also is Skype video chat to home and speak to her family there, which would have been unheard of not that long ago.

That’s one thing that the people who decry the impact of technology tend to strategically forget: Because we’re growing up in a connected world, we’re never going to be lonely. The problem of loneliness in the elderly is hugely upsetting – but thanks to the magic of Skype and future applications similar… we’re never going to be in the traditional “isolated in the old folks home” position when we’re old because we’ll have the technological tools to keep us connected to the wider world.

To assume that greater connectivity is a bad thing would be an arrogance born of privilege – and assuming everyone has the ability to move around like you do. (What about the poor people working through the festive season?)

And finally, of course… there is one extra inadvertent joy from social media on Christmas Day. In addition to being able to keep in touch with your friends – y’know, because you’re a nice person – you can also use it to get a window into the Christmas experience other people are having.

For example, one emerging Christmas tradition is discovering the tweets of ungrateful brats – like the below: 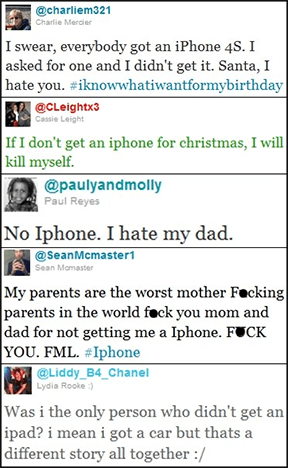 Expect to see much more of this – probably with kids complaining about the lack of PS4 or Xbox One – next week. Who knows? We might even post a round-up of the funniest/most depressing.

So I say yes to a technological Christmas – and yes to the innovations that social media have brought to the festive season. Thanks to the power of the internet, we can finally celebrate together… which is what Christmas is all about, right?

Have a good Christmas, everyone!