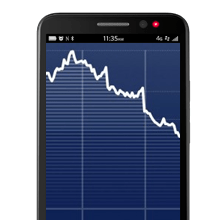 Beleaguered phone makers Blackberry have today announced that they’re abandoning their sell-off plan. This has sent shares plummeting as no one can quite figure out what they’re going to do to get themselves out of the pit that they are in.

Having been mercilessly sunk by market forces following the touchscreen phone revolution, the company that only a few years ago been the Next Big Thing was raved about by business people and “da kidz” alike – but now like an old family pet, everyone is just expecting the inevitable news.

Despite the doom and gloom (which I admit, I’m adding to) – they’re not dead yet, and with good reason. They still have a substantial user base, lots of assets, and crucially a tonne of useful mobile patents.

So what can they do? Here’s our view of the options.

The most obvious thing to do is to switch to Android. As we’ve previously said – it’s all about the eco-system, and no one is going to buy a phone that doesn’t have any apps for it… even if the platform is (theoretically) better. Look at how the more popular VHS beat the technically-better Betamax all those years ago.

Of course – there’s a couple of risks with this approach. Switching to Android would put Blackberry into direct competition with the likes of Samsung, HTC, LG, and Google themselves – so they’d have to do something pretty spectacular on the hardware front. Though it’s not like BB don’t have any experience making phones, right?

Similarly, there’s also the loss of prestige – like when Sega stopped making consoles and became just another developer alongside EA and Activision et al. They lost what made them special. More practically, this isn’t just a psychological blow but also means BB will no longer be a platform holder, and thus able to take a cut from app sales on the platform – and dictate the terms in which people can make apps for their hardware. Though as no one is using Blackberrys anyway, and Samsung seem to be doing okay… what do they have to lose?

The thinking goes that when Nokia abandoned the dying Symbian platform, they chose Microsoft’s Windows Phone over Android because rather than be a medium-sized fish in a big ocean, they’d instead be a massive fish (think a blue fish tuna) floating in a barrel – with no other manufacturers competing for Microsoft’s ear. Whilst this has certainly had mixed results for Nokia, it was good for Microsoft as it meant – frankly – they were able to compete as a distant third platform to Android and iOS.

If Blackberry also bought into Microsoft’s Windows Phone platform it could become an even more viable third player – and Blackberry would retain some of the ‘prestige’ along with Nokia of being one of the few manufacturers who makes hardware for this platform, which aesthetically can compete with iOS.

Merge with other technology companies

Blackberry could put itself back up for sale – someone will surely want it? Maybe Microsoft might fancy another acquisition to bolster it’s Nokia purchase? Maybe Google will want some of that enterprise expertise to stop business customers heading over to iOS?

Hell, Apple have a spare few billion left in the bank (allegedly more liquid cash than the US government) – maybe they might buy them out of pity?

Or, of course, they could merge with AOL, MySpace and the concept of a print newspaper to create the most redundant conglomerate in history.

Stagger onwards into oblivion and hope for the game-changer

People wrote off Apple before they came out with the iPod. Nintendo were gonners until they pulled the Wii out of nowhere. Could Blackberry survive? They need to do something truly game-changing. Not a Sarah Palin-style “Hail Mary” pass, as the Americans say, but they need to figure out what the next big thing in mobile is and make it happen.

Since the original iPhone (and perhaps almost as crucially, the app store business model), whilst phone upgrades have still been exciting, they’ve all been pretty similar: faster processors and bigger screens with no huge innovations.

Blackberry need to figure out what the next huge thing is going to be. Google, Apple and Samsung are no doubt working on things beyond our current comprehension (Google Glass, smart watches), so BB shouldn’t be dragging their feet.

However, I don’t know what that next big thing is going to be – if I did, I’d be a billionaire. So my advice to Blackberry is simple: Get your thinking caps on!