Today is a new dawn for gaming – with the launch of the PS4 today now all of the major console manufacturers have transitioned to the next generation. Sadly though, it seems that Microsoft and possibly Sony just can’t help continuing the tired tradition of sexism with it.

You’ve might have seen Microsoft’s slip-up already – they thought it was a good idea to let users generate a letter to send to one’s partner, extolling the virtues of the Xbox One. Unfortunately, whoever wanted to set the defaults decided that rather than embrace the fact that 45% of gamers are women, decided to include every stereotype possible. Hey – I know microcomputing is based on binary, guys, but not the gender binary! 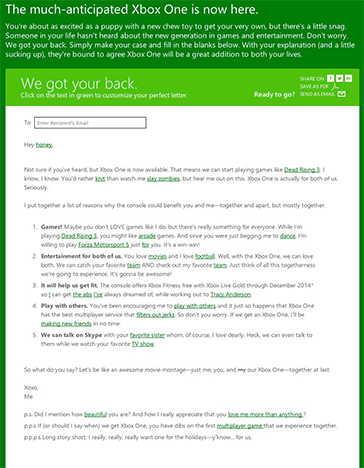 Unsurprisingly Microsoft have since apologised and backtracked.

Meanwhile to advertise today’s UK PS4 launch Sony have bought an advert in today’s Sun newspaper. I can’t quite work out the gender politics of this – but it certainly seems dodgy. Sony have replaced Page 3, famous for it’s topless photos of women, with this advert: 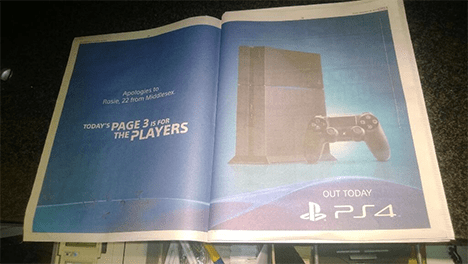 “Apologies to Rosie, 22, from Middlesex… Today’s Page 3 is for the Players”, it says. Which, umm, sounds progressive – yet isn’t “Players” a loaded term?

“A male who is skilled at manipulating (“playing”) others, and especially at seducing women by pretending to care about them, when in reality they are only interested in sex. Possibly derived from the phrases “play him for a fool”, or “play him like a violin”. The term was popularized by hip-hop culture, but was commonly recognized among urban American blacks by the 1970s. “

Are Sony implicitly making a gendered assumption about the PS4’s audience? Or am I searching too hard to find offence in this? I’d love to think they just meant gamers and give them benefit of the doubt… but it’s not like the games industry has a spotless track record in this area.

Apparently things aren’t much better in France earlier. According to this website, Sony France tweeted this out: 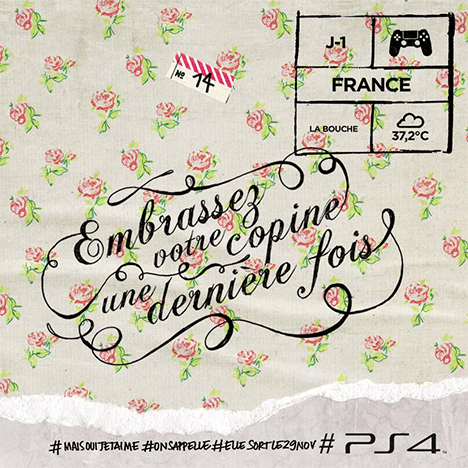 Which translates to “Kiss your girlfriend one last time #YeahYeahLoveyou #IllCallYou #GetsOutOnNov29” – because women don’t like games, right? Haha?

Let’s hope things get a bit better from here.