The next generation isn’t all about gaming – it’s about watching too, which is why Microsoft have just announced their content partners for the Xbox One’s launch window. The only real conspicuous absence is that of the BBC iPlayer. 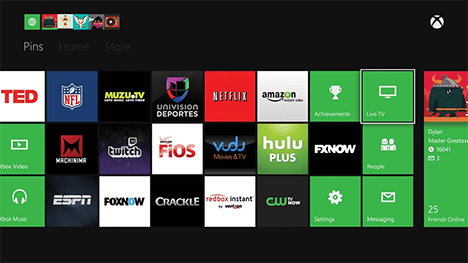 (This image is from the American Xbox One, just to confuse things)

For a few years now the Xbox 360 has been offering different video apps from different providers – from the likes of Netflix and Sky – and this is set to continue with the Xbox One’s offering. The full list of Britain-specific apps are as follows:

If you’re a 360 user then none of these will be surprising – all have an existing presence on the 360. There’s also a number of global apps joining the list including Microsoft’s own: Skype, SkyDrive, Xbox Fitness, Xbox Video, Xbox Music and Internet Explorer.

The big missing apps – which are available on Xbox 360 – are the BBC iPlayer and YouTube – though surely it’s only a matter of time until they appears too?

Of course this is also in addition to the One’s hugely enhanced TV capabilities. There’s a HDMI-in socket on the box for you to feed in your satellite or cable box, to watch TV through the Xbox, and even control it and change channel using voice commands via Kinect. We’re not entirely sure whether this will work with Virgin Media and Sky boxes yet – but we’ll let you know when we find out.