Yesterday I got the chance to try out one of Samsung’s newest smart TVs – the 51″ beast known as the Samsung F5500. It’s got tonnes of different features, can talk to a number of other household gadgets, access the internet… and apparently it even works as a television too. 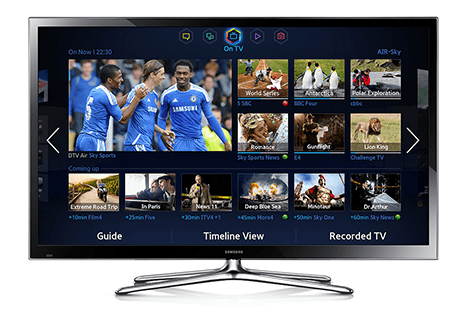 On first switching on the Samsung, you have to go through the standard tuning setup – there’s a built in Freeview tuner, along so a now redundant analogue one. After this though is the more important step: setting up the internet connection. There’s an ethernet port on the back, or you can use wifi. Once this is setup – it’s just a case of hitting the “Smart TV” button on one of the two remotes and you can play with the exciting stuff.

The TV itself has a large selection of sockets and ports: 3x HDMI, Component & Composite In, Scart, digital audio out, and even infrared out… which you might want to use, for some reason, right? This is in addition to the ethernet socket and two USB ports – so you can plug in a thumb-drive or digital camera to view the pictures/videos.

Another nice feature is support for Samsung screen mirroring – so if you’ve got a compatible Samsung phone, you can throw it up on the big screen so that you can bore the whole family at once with Candy Crush.

The selection of built-in apps is pretty much the array of services that have become ubiquitous across all devices: iPlayer, Netflix, YouTube and Skype – amongst tonnes of other lesser-known services. I still find the fact you can run Skype on a TV – and have incoming call notifications pop up over the TV show you’re watching a little space-age.

Sadly the TV doesn’t have a built in camera (unlike this expensive 4K telly from Panasonic) – but the TV is apparently compatible with a couple of plug-in cameras that are available separately (the Samsung VG-STC2000 and VG-STC3000).

One nice addition too was that of radio streaming service TuneIn, which gives you access to thousands of radio stations from around the world.

Like everything these days, there’s also a Samsung app store, where you can download more apps to expand the experience.

It can even run games – albeit of the sort of you’d usually expect to find on a mobile phone from five years ago. Maybe it was just poor luck in picking the game, but the ropey Pool game I downloaded was a pain to play – both sluggish to react to what I was doing on the remote and slow too.

The other big push Samsung are making is with “Samsung accounts” – the TV has a built in on-demand film service that requires account creation with Samsung, which seems to have a better selection of films that Netflix, in my entirely subjective opinion. Similarly there’s even social functionality – where you can see what your friends have been watching… but I can’t help but wonder if we need a world where I can curate a friends list on my TV, to let them know I’ve been watching Newsnight. 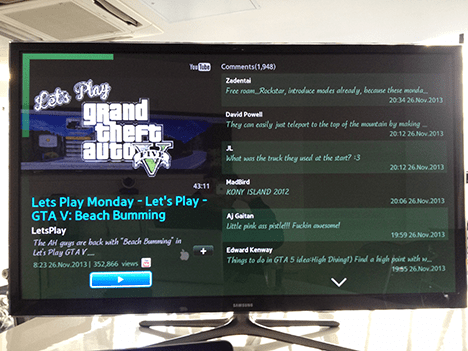 Similarly amusingly is the “What’s Hot” videos section of the main navigation, which is driven by YouTube. You’re given a selection of the most popular videos on YouTube – along with, bizarrely, an interface for viewing the YouTube comments on the video. That’s right – Samsung think that you might actually want to read the comments on a YouTube video.

There’s also a built in web browser, that whilst slow worked surprisingly well. I tried loading up one of my favourite gaming shows, Zero Punctuation, and not only did it load up the graphically heavy website, but it played the flash video fine – and even in full screen, giving it the full TV experience. I wouldn’t want to use the browser to replace a laptop or a tablet, but it was a nice-to-have for the few things that the TV doesn’t support natively. It can even do tabbed browsing. 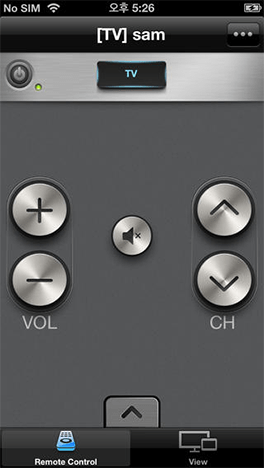 The biggest challenge faced by the TV is perhaps the perennial: input devices. The telly comes with two different remotes: the traditional one with numbered buttons, ideal for your gran to use, and another containing a touchpad. The touchpad isn’t bad for navigating around the web browser, or generally on the on-screen menus. The trouble is with text entry – which is annoyingly common on smart TVs when you have to login to various accounts and the like. Swishing around the on-screen keyboard is… about as fun as it sounds, but is slow to make progress. There’s an attempt at predictive text, but this isn’t particularly useful either. Frankly, it’d probably be quicker if old-fashioned “T9” style predictive text worked with the number pad on the other remote. Remember how fast we got at typing on our old Nokia 3210s?

Samsung have recognised that it’s a pain in the arse though – and like Panasonic have included an attempt at Siri-style voice controls – with the mic being in the remote. (Annoyingly, this mic can’t be used for Skype). Simply hold the voice command button on the remote, and you should be able to dictate controls or text. When I tried this out it wasn’t a great experience – often the voice command interface overlayed on the screen and didn’t listen to me – and then wouldn’t disappear from the screen after. It started working better a little later, though I remain to be convinced it’s the future.

The one good solution seems to be app-based. Panasonic, in their smart TV range have an app available for both iPhone and Android that can not only control the TV – including use as a keyboard for text input – but also take voice commands, and even allow sharing of content on the phone direct to the screen (you can “flick” an image upwards to send it to TV). Sadly, the Samsung equivalent app is… utterly terrible. It replicates the functionality of the granny remote and unless I’m missing something… that’s it.

Still – for all of these flaws, they can be fixed by software updates – and I’ve no doubt Samsung are working on making them better. And don’t get me wrong – though I’ve complained about some things, the TV is very accomplished. If you’re looking for something that will support nearly every streaming service you could want, and show content from your phone or camera, and – oh yeah – let you watch TV, then it works great. I watched a bit of Doctor Who on the built in iPlayer yesterday and it worked great. It’s only on the “non-core” functionality that some work might be needed. And there’s a lot of good even in that – Skype turning TV into the videophone we’ve wanted since The Jetsons, and the web browser’s flash support for non-YouTube videos is a big plus in my book.