As you may have seen, yesterday I got a chance to try out one of Samsung’s newer Smart TVs. And very good it was too – in addition to simply watching TV, it was connected to the internet, and with it a whole host of exciting options opened up: YouTube, Netflix, Skype – and there was even a web browser. And whilst this is exciting, it did make me think: do we really need Smart TVs? 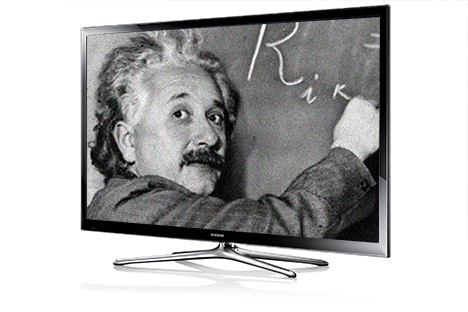 Hear me out – I’m not anti-technology (I edit TechDigest, for a start) – but I can’t help but wonder if TVs aren’t particularly well placed for the relentless pace of technological change.

Growing up, during the 21 years that I lived with my parents, we went through three TVs – that’s averaging a new TV once every nine years. By contrast – we’re now of the habit of changing our phones every eighteen months for the latest version that can do seemingly many more things than the previous version. The iPhone 5S is so many times more powerful than the original iPhone that apps designed for the new phone won’t run on the first few iPhones. But this is easily replaceable.

What I can’t quite get my head around is why I’d want to get rid of my TV. After all – the massive screen still works great, and will display whatever HDMI device I plug into it. Until we reach a point when 4K becomes plausible, I can’t see any reason why I’d want to switch out the massive screen I’ve already spent upwards of £600 on. Apart from the expense, there’s all of the hassle in getting rid of something so large.

What’s much more preferable is the option of switching out the clever box beneath it – my Xbox 360 will become a PS4 or Xbox One, and my Freesat box could easily become a Sky+ HD DVR, at a much lower price than replacing the whole massive screen. I want a dumb screen and a clever, replaceable box.

Where Smart TVs become important is this is when you think about what happens over time. At the moment you’ll be able to get your Netflix and all of the services you require – but eventually as most technology moves along, services may drop support for aging equipment. Like how if you were stuck with an original iPhone now you’d be unable to run iOS7, unable to download the latest versions of Facebook and Twitter. And given that we’re likely to hang on to TVs for longer than other gadgets… are our smart TVs destined to become a wasteland of apps that no longer function?

There’s another factor at play here too. Unlike Xbox or iOS, there isn’t a unifying Smart TV standard or platform. Netflix know that if they want to work on games consoles then all they have to do is make an app for Xbox and Playstation (and maybe Wii U…) – so that’s only two (or three!) platforms to develop for. Similarly if they want Netflix to be available on mobile then it’s just iOS and Android they need to worry about.

On the other hand, there are tonnes of different Smart TV makers, all with different platforms and different standards: Samsung, LG, Sony, Panasonic, Toshiba and many others. Given how fractured the TV market is, at some point it’s going to become uneconomic to develop apps for the TVs that only a handful of people are using. And I don’t know about you, but I’d feel much better throwing away my £40 Roku box or Chromecast dongle and getting a new one than my £600 TV if I wanted something to watch Netflix on.

So I’m not so sure Smart TVs are such a great idea – a splintered platform and software redundancy long before we want to get rid of the hardware is surely not an appetising offer?

So do we need Smart TVs? Or should we just have dumb TVs with clever things plugged into them? Let me know what you think in the comments.