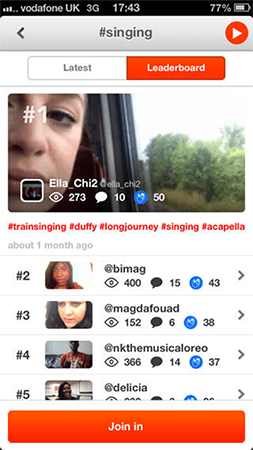 This week sees the official launch of FightMe, a “competitive social network” that aims to be a bit like the X-Factor.

The premise is fairly simple: Once signed up you can post an unedited 30-second video of yourself showcasing your skill, be it singing, beatboxing or making a political point – and then it is up to other users of the website to rate you.

As a viewer you can either give the performer “Applause” (analogous to a Facebook Like)post a comment… or if you’re feeling ambitious challenge their prowess in whatever the field is, and post a video response of you doing it better.

There’s lots on there already – including everything from conventional singing and beatboxing, to a bloke walking down some stairs on his hands. Topics are all driven by hashtags (#singing, #dancing, etc) – so conceivably any skill could become competitive. Personally I’m hoping to see #morrisdancing and #sheepdogtrials become the main focuses of the site.

There’s also an iPhone app for doing it all on the go. The app appears to replicate all of the functionality of the website, and crucially, allows for a means to shoot video and upload it straight away – meaning that you can happily reply in haste before letting your brain kick in and realising that boasting about being able to do the #loudestfart might not be the wisest thing to do.

So go on, go on and have a look at FightMe – unless you think you can make a #bettercompetitivesocialnetwork.