The official Xbox Tumblr account has posted up a list of all of the voice commands for the Xbox One. If you picked up an Xbox One this weekend, then take a look to see what you should be shouting at inanimate objects. 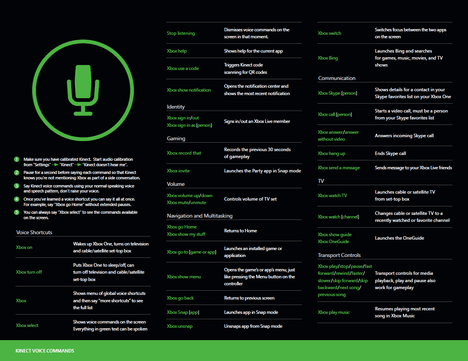 It’s nice to have a complete list as it means we won’t be shouting “Xbox stop Piers Morgan appearing on my TV” in vain – and whilst there are no real surprises, there are some useful commands to note:

“Xbox Record That” will automatically trigger a recording of your last 30 seconds of gaming for saving to Twitch – super useful if you want to remain in the game after sniping someone from across the map, but still want to share it on Twitch.

“Xbox Answer” for answering Skype calls easily – though be careful as it uses video by default. So if you’re not dressed, don’t forget to instead say “Xbox Answer without video” and hope to god that the voice recognition system heard that last part correctly.

Personally though, I’m not sure the list is exhaustive enough. How about “Xbox Emergency Kittens” for when the day gets just too stressful? It could have the One automatically find some videos of kittens on YouTube and play them full screen. C’mon Microsoft – get on it!