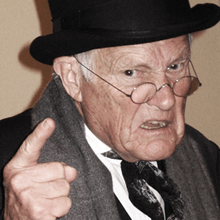 What will be the generational markers of our generation? In other words – what technology will give away that you’re part of a specific generation?

Martin Belam has a great example of this. Like how our grandparents would refer to listening to “the wireless” and not “the radio” – will “clicking” on something on a screen become an anachronism in a world of touchscreens and pressing on buttons with our fingers, and not mice? So the generational marker is that if someone uses “click” instead of “press”, then chances are they’re of the slightly older generation.

In my last opinion piece, I talked about perceptions of permenance. In brief, I wondered how permanent storage of photos on Facebook is, compared to say, a traditional folder-based Google Drive, or even a hard printed copy. I wonder if this perception is going to be a generational marker?

As I said previously, I’m currently 26 – so grew up with computers, but initially at a time when they were not ubiquitous. So I’m probably young enough to be part of the first generation for whom computers were a fact of everyday life – but then at the same time, I can remember when computers would be shut down after doing what I needed, and being able go days at a time without using one (shocking, I know).

This makes me think of how I interact with online services. To me, Facebook, Twitter, Spotify and all of these different internet services that form major parts of my life seems transitive – like they might not last. I wonder if this anxiety about whether it will last will be a generational marker? For the kids of today, Facebook has always been there and perhaps always will be.

Maybe I am just being an old fogey. Presumably when the electric grid was invented, there were still some electrical holdouts, who insisted on keeping their own generator – just in case the grid, for whatever reason, ceased to exist one day?

We can see with our youthful hindsight that hanging on to a generator would be a bit silly. After all, our entire society is built on confidence in systems. At it’s most basic, we have language – on top of this we’ve managed to build states, politics and capitalism – in which resources are managed by an outside agent so we don’t need to worry. We can be confident that Sainsbury’s will be open tomorrow because capitalism continues to function – so we don’t need to worry about stocking up on tinned food just in case it’s not there. In turn we know capitalism will continue because we can be confident that we have created a political system that ensures rule of law and that justice and order will be maintained. There’s no need for us to live inside shielded forts looking out for marauding bandits, because we trust that the state will still be there tomorrow to protect us.

So can these assumptions be extended to online services? Is it futile to worry that Facebook or Google might not be there tomorrow? Will the kids of today inevitably end up arguing that I’m old and out of touch? Will my fears about my data being kept safe make me look like the man in 1950 ranting about how television is the work of the devil? Will this be a generational marker?

And what other potential technological generational markers are there? Maybe in the future our worries about privacy will be a curiosity in an era of mass-surveillance and Facebook knowing everything about us? Remember laughing when our parents worried about having their credit card details stolen when buying from Amazon in 1997? Perhaps it won’t be so funny when our children find it funny that we’re worried about publishing every last detail of our lives online.

Why not post in the comments if you have any suggestions for other markers?