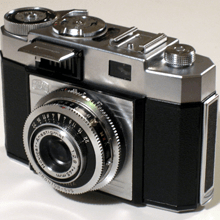 I was born in 1987, which perhaps makes me one of the last people born to not have a complete archive of photos of my entire life. At least in the developed world (no pun intended, honest). Kids born since the invention of camera phones are growing up in a world of ubiquitous photography – their parents will have an endless supply of photos. One of my friends who is a new parent, takes a photo of his daughter every single day.

By comparison, whilst my parents obviously have stashed somewhere a number of pictures of me growing up, these are inevitably centered mostly around holidays and birthdays and the like. This is a whole gigantic magnitude of difference from how thanks to Instagram, a meal is barely a meal without a photo opportunity as the starter.

And this has got me thinking about how we approach these photographic memories – and how we can make sure that they are permanent.

The photos of my childhood at my parents’ house are, presumably, sat in a photo album or a box at the back of a cupboard. The photos I have taken since going digital maybe ten years ago are scattered between hard disks, computers, and Facebook. Which are more permanent? And crucially – which are easier to find?

The trouble is, computers feel transient. We expect that the computers we use today will become obsolete, or will break down tomorrow. It’s why we still refer sometimes to printing something out as a “hard copy” – something that will theoretically last for much longer (even if it’s lost in a pile of unsorted papers).

Similarly – I know the photos my parents have that were taken on an old analogue camera could disappear in an instant if a fire breaks out – but there’s still something that feels permanent – compared to the photos I’ve posted on Twitter and Facebook. Will I ever find that specific photo again, in amongst all of my thousands of other tweets? Worse still – what if the photo was taken by a friend and I was tagged? What if they delete the photos from Facebook – is that photo lost to me forever?

And what of Facebook itself – how do we know it’s going to be around forever? And will it always accept photo uploads? Considering how often it’s interface changes, it’s hard to feel reassured. Anyone who has ever used Posterous can surely tell a warning tale about how online services don’t last forever.

My current strategy for backing up my photographic memories is to use Google Drive. For something like £4 a month, you can boost your Drive up to 100GB, and sync files from a desktop like you can with Dropbox. In addition to saving all of my existing photos to there, I’ve also setup an Ifttt trigger to automatically copy across to Drive any tagged photos of me on Facebook.

Perhaps inexplicably, this feels more lasting than Facebook. I’m not sure why given both are cloud services that could, at least in theory, be switched off at any time. I guess it’s because I’m assuming that Google aren’t going to go anywhere quickly – and if they do decide to get rid of Drive, then they’re at least likely to give customers a fair warning, rather than just go pop.

I picked Google over Dropbox too because of their size – thinking that Dropbox is more likely to disappear. But then somewhere in the deep recesses of my mind I know I’m a fool – look at what they did to Google Reader. And look at what happened to Woolworths, and perhaps more relevantly, Kodak.

Perhaps there’s a more fundamental problem. The photos are jpegs – are jpegs still going to be supported by the technology in future decades? At least with a printed photo it will always remain printed and visible when looked at – but if in 10, 20, or even 50 years time we’re using a different format on a different medium, will I be able to retrieve the pictures? What would you do if someone handed you a floppy disc containing something important, saved as a picture for the Amiga 500? Even if you could somehow plug the disc into your modern computer, opening the file wouldn’t be easy.

So are my pictures really safe now? Is there a way I can make sure these memories will last? Is the aspiration of permanence a pointless task given that eventually we’ll all be dead and the universe will experience heat death, when there will be no more entropy? Is there such thing a digital permanence? And will I even want to look back at this stuff anyway?