Amongst people who hack hardware “Does it run Doom?” has almost become a catchphrase. The ancient space shooter, first released in 1993, has become a benchmark for both a gadget’s technical abilities and a hacker’s ingenuity and skill.

In addition to running on pretty much every traditional computer under the sun, it has also been hacked on to a wide variety of other hardware. Here’s a selection.

Let’s start with an obvious candidate. Despite having no official release on the system in the above video is Doom running on a Nintendo DS. Rather niftily, the bottom screen has been transformed into a map of the game.

The TI-Nspire series of graphical calculators are favourites amongst hackers – and as you can see above, Doom runs on this too. What’s quite cool about the model used is that it comes with a touchpad, which makes installing Doom on there almost seem like a sane idea. 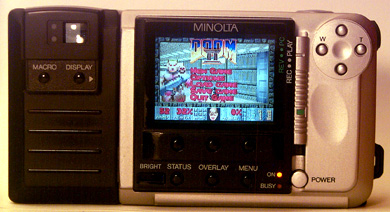 No video of this sadly, but here’s Doom running on a fairly old digital camera in the viewfinder. Or the photographer has gone on holiday to a low-res alien-infested Mars, of course. But I prefer the first theory.

Because the iPhone would be just too easy, here’s the game running on an iPod Classic – the sort with a touchwheel. Whilst this may make the game tricky control, there’s no way to deny it’s not actually working.

Remember the Zune? It was Microsoft’s attempt to take on the original iPod that largely sunk without a trace (I wonder if it had anything to do with them releasing the device in the always-popular Brown colour?).

It runs in a small window, and forces you to use on-screen controls so might be fiddly – but it works!

Bored in the lab? Then why not install Doom you oscilloscope? Sure, a little less science might remain not done… but don’t we know enough already? Empirical facts about how our universe works are one thing – but isn’t fragging one of those big floaty eyeball things a more noble endeavor?

This is a little bit mind-blowing – it’s Doom running on a Vic 20 – which yes, is a normal computer of sorts, but it was released in 1980 – 13 years before Doom. And running a completely incompatible operating system.

Someone has taken the time the port it across – and yes, it runs in a tiny “window” at a low frame rate… but it’s still Doom!

Okay, so this isn’t strictly a piano running Doom as a piece of software but it is pretty cool. Someone has hooked up a proper piano rather than a traditional (QWERTY) keyboard – and is using it to control Doom. Not hugely practical or tuneful – but something that would definitely make classical music more interesting.

And here’s another controller hack – this time using your whole body with a Microsoft Kinect camera to control the action. Could it be more realistic than simply using a keyboard? Umm…

Finally how about a smartwatch? In my research I haven’t yet found anyone who has managed to make Doom work on Google Glass (sadly) but the video above gives an indication of where we’re at – with the game running on an early smartwatch. The video shows it looking a bit ropey at the moment – it’s not so much a game as a tech demo. But give the hackers time…

Let us know in the comments if you’ve seen Doom running on anything else that’s a little strange!