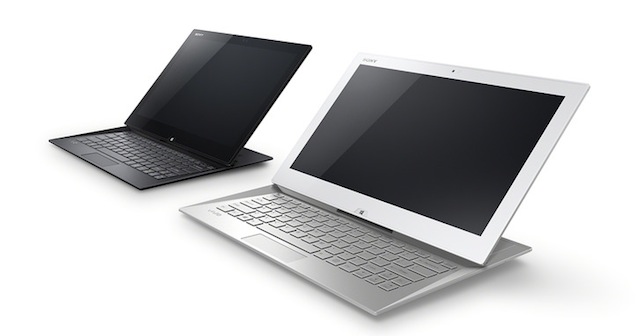 Doubling up as both ultrabook and tablet, the device features a sliding screen that can lay flat while facing upwards over the keys to act like a traditional slate device.

Measuring 13.3-inches and packing in a Full HD Triluminous touchscreen display with X-Reality picture processing technology, the Vaio Duo 13 can be configured to include Intel’s latest Haswell 4th generation processors, as much as 8GB of RAM and a 512GB SSD.

Running Windows 8, the 4G-enabled slider also comes with a digitiser stylus for handwritten note taking, with the device’s Note Anytime software allowing you to scribble whenever you like rather than hunting for an associated app.

The Vaio Duo 13 also features an 8MP rear-facing camera that is capable of character recognition alongside built-in software, making the device also a sort of on-the-go document scanner too. There’s also a Wi-Fi router included, allowing the ultrabook to act as a hotspot for 5 other devices.

15 hours is the stated battery life, one that, if true, would put it in the upper echelons of laptop power packs.

No word on pricing yet, but expect a June release.