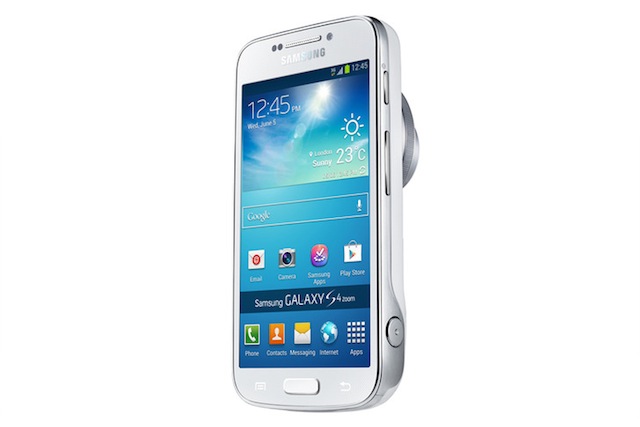 Here comes a Samsung Galaxy smartphone with a real difference; taking its cues from last year’s Samsung Galaxy Camera, the Galaxy S4 Zoom straps a giant 16MP CMOS sensor and 10x optical zoom onto the back of a Galaxy-S4-alike for some true cameraphone chops.

A few unique hardware controls offer quick access to camera-specific functions. A “Zoom ring” lets you instantly share snapped photos from a social network, as well as booting straight to the camera from sleep. There’s no optical zoom hardware control though, so that’s a touchscreen tap slider you’ll be dragging around.

With optical image stabilisation and a Xenon flash, the S4 Zoom also introduces a new feature called Photo Suggest, which taps into an online library of images to help give you a better idea of composition for your own shots, and also suggests notable photo spots in your locality. All the standard Galaxy S4 camera features will return too.

There’s also a slight RAM drop to 1.5GB, but the real stickler is onboard storage – offering just 8GB built-in with microSD support, you’re really going to have to invest in a memory card if you plan on using this device as a true compact camera replacement.

Like big butts and cannot lie? Good, ‘cos the Samsung Galaxy S4 Zoom has got quite the rump on it in order to accommodate that optical zoom, measuring 125.5 x 63.5 x 15.4 mm and weighing 208g. Still, if that sensor is up to scratch it may mean you can leave your compact at home, so that extra heft will actually be saving space in the long run.

No price of release date set yet, but Samsung have said to expect a release at some point through the summer.