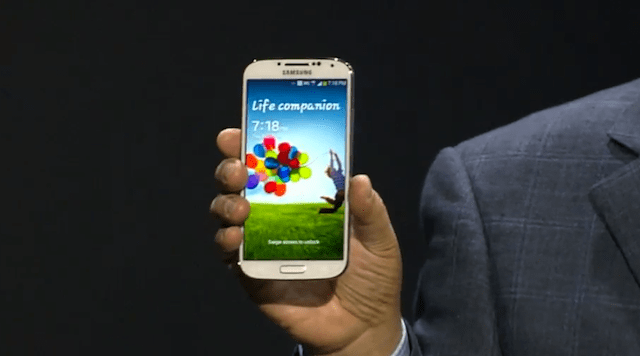 The Samsung Galaxy S4 has been officially revealed at a glitzy launch event in New York City tonight, ending months of speculation as to what the hotly-anticipated Android smartphone will offer.

The successor to the 40-million selling Samsung Galaxy S3, the Galaxy S4 will launch on April 26 in the UK as well as across 155 other countries, and features a 5-inch Full HD Super AMOLED 441ppi screen and 4G LTE connectivity in a chassis very similar to that of its predecessor. Again a curvy handset, it measures 136.6 x 69.8 x 7.9 mm overall.

Android 4.2.2 Jelly Bean is the operating system powering the Galaxy S4, with a 1.6GHz “Octa Core” processor, backed by 2GB of RAM, ticking away under the hood.

Two colours – “Black Mist” and “White Frost”, will be available, with the phone weighing just 130 grams.

A 13MP camera sits on the rear, with a front facing 2MP camera also included. Smart Scroll web-page eye-tracking and Smart Pause media pausing are included, with the front facing camera following your eye movements and angle of the handset in your hand to pan pages automatically or pause videos as an alternative, passive control method, as revealed in a series of leaks prior to the event.

The rear and front camera systems can also be used in tandem using a new “Dual Camera” function, letting you take simultaneous photos and videos with both cameras and then blending the resulting content together.

These images and videos are then stored in the “Story Album”, a gallery system that curates content, such as SNS posts, memos, location and weather information, as well as photos and videos, to create a photo album containing information relating to when the content was created.

16GB, 32GB and 64GB Galaxy S4 models will be available, each with microSD expansion. 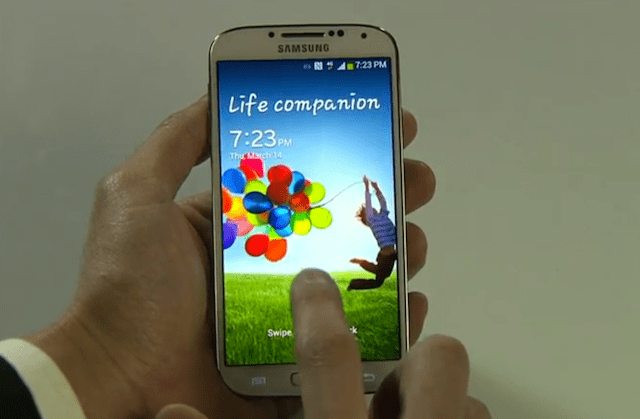 Just like the recently revealed HTC One, the phone also includes an IR blaster for controlling home cinema devices. And, like Nokia’s premium smartphones, the handset’s screen also works when wearing gloves.

A 2,600mAh removable battery should be capacious enough to see you through a day too.

“Over the past several weeks, we have heard an amazing amount of rumour and speculation about what we are going to unveil here tonight,” said Samsung’s head honcho, JK Shin.

“We’ve taken technology and innovation to help us get closer to what matters in life. We will imagine the possibilities, explore a new direction, and listen to you, to help us understand what a smartphone should provide in our lives.”

No word on pricing yet, but all the major UK network carriers (Three, Orange, Vodafone, EE and others), except at present O2, have announced they will be offering the phone.

So, is the latest Galaxy flagship everything you dreamed it would be? Enough to make you reconsider that iPhone 5, Sony Xperia Z or HTC One purchase, or is it too close to last year’s Galaxy S3 handset for your liking? Share your thoughts in the comments section below!