Home audio specialist Musical Fidelity turn their attention to earphones with the EB-50 in-ear buds. Featuring an eye-catching design not usually seen with in-ear models, can their sound quality match their invention elsewhere? Read our full review to find out!

Given that earphones tend to be hidden away in your ears rather than over them for all to see, their design is usually not all that exciting, often amounting to little more than black plastic ovals to shove into the sides of your head. Musical Fidelity have taken a different approach with their EB-50 earphones. Made of aluminium, they feature a striking design that sees the left and right buds signified by blue and red highlights. Four colourful screws are embedded into the other edge of each, alongside similarly coloured bands along the shaft. Each bud is also finished with a pair of textured bands, giving them a premium feel. It’s not easy to manage Beats-like branding with in-ear buds, but Musical Fidelity have made as eye-catching a pair of headphones as is tastefully possible.

A 1.2 metre cable runs off the buds, with a one-button mic controller for pausing and resuming track playback and answering calls about 10-inches down from the left earbud. There are no volume controls here, so you’ll need to pull out your playback device to sort that out.

A little way down the cable from the mic is an aluminium fastener, with the cable ending in a 3.5mm L-jack next to a cable tidy. Frustratingly, the cable has a rubbery finish that when combined with the extra weight of the aluminium fastener can cause the cabling to tangle often if that cable tidy isn’t’ used. The cable isn’t detachable from the buds either, and given that these are at the pricier end of the in-ear market, you’ll do well to look after them knowing that a damaged cable on the EB-50s can’t be replaced.

The sturdy build of the buds themselves also leads them to sometimes work their way out of your ears. They’re heavier than your average buds. However, Musical Fidelity offer a wide range of tips to swap out on the EB-50s, letting you find a comfortably snug fit. These tips also help accommodate some passive noise-isolation, letting you enjoy your tunes without the world seeping in to spoil them.

In fact, Musical Fidelity’s extras thrown in here are among the most generous we’ve seen in a while. As well as both a hard carry case and a leather bag, they’ve also thrown in a 6.35mm jack, a headphone splitter, a lapel clip, optional hooks for to support the weight of the buds, a cleaning cloth (though we’re not sure how dirty anyone ever really gets their earphones – the thought in fact makes us a little queasy) and ten additional sets of tips to suit all ear sizes. It’s a very nice package. 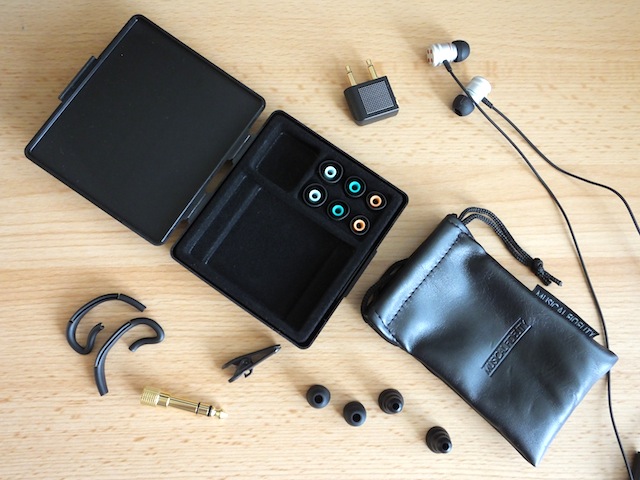 With the mid-ranges the most dominant, the EB-50s aren’t quite as detailed at the top-end as as some rival earphones, nor as overwrought at the bottom. As such they favour rock and acoustic music, where the mids and mid-lows often take precedence. We rocked along to Queens Of The Stoneage’s latest album ‘…Like Clockwork” enjoyably, with the chunky guitar riffs hammering home satisfyingly. The shimmer of our electronic favourites Crystal Castles wasn’t quite as pronounced as we’d have liked in the EB-50s, making them hard to recommend to dance music fans, but no genre felt so misrepresented as to be an uncomfortable listen through the buds.

Musical Fidelity’s first foray into the earphone space is a solid one, showing great promise for their new venture, particularly in terms of industrial design where they’re already carving out a recognisable look for themselves. A little more treble in the mix would have been appreciated sonically, as well as detachable cabling, but overall it’s a generous package that’s worthy of your money.