Formed from the ashes of the late, great TOCA racing series, the long-dormant Grid franchise returns. Walking the line between simulation and arcade racer, can it measure up against petrol-head favourites Gran Turismo and Forza? Read our full review to find out.

Though the TOCA series that laid the foundations for Grid 2 many moons ago was primarily a simulation racer, the rise of titles like Burnout and the Forza series have seen developers Codemasters take the Grid series down a more accessible route. As punchy as the Burnout series with its car damage modelling (if not quite as boisterously over the top), Grid 2’s cars lean slightly more towards the arcade end of the racing spectrum. Though steering is weighty and measured, the emphasis on drifting and the ability to rewind time a limited number of times following particularly nasty crashes give Grid 2, like its predecessor, a more playful tone than the likes of Gran Turismo or even its TOCA forefathers. There’s no scalable handling assist option here either, meaning you’ve to persevere and learn the quirks of Grid 2’s driving systems in order to succeed. While it arguably denies Grid 2 a unique feel, being a sort of mash-up of some of the best bits of recent driving titles, it’s undeniably good fun throughout, giving all races a thrilling sense of speed and danger. 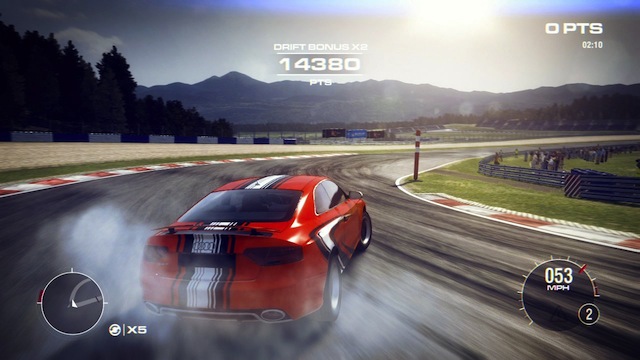 Rather than obsessing over an exhaustive list of cars, Grid 2 focuses on a few dozen lust-worthy road warriors, decking them out in fictional sponsor-heavy paint jobs. While the lack of real-world licensing may put off purists, Codemasters have weaved a worthy plot through Grid 2’s single player campaign to justify the game’s cars and sponsors. A monied petrol-head is looking to establish a new racing championship called “World Series Racing”, a multi-discipline season that pits racers of many specialities against each other on a global stage. You’re among those racers. Though only ever really a framing device to get you from one race or event to the next, it’s delivered with authenticity, as your racer rises in popularity on social media channels and becomes the talk of in-game ESPN pundits. It gives a great sense of momentum and progression to the campaign.

Races occur across the globe in locations as varied as Paris and Hong Kong, on circuit tracks and offroad trails. As well as standard races, other of the many modes contained within include point-to-point chases, time trials and an interesting “live-routes” race that sees corners and turns revealed only after the previous one was hit, changing with every lap. It’s chaotic fun, and one where the visceral car damage modelling system really shines as racers trying to second-guess the circuit collide spectacularly, causing bonnets to crumple and fibre glass to splinter. 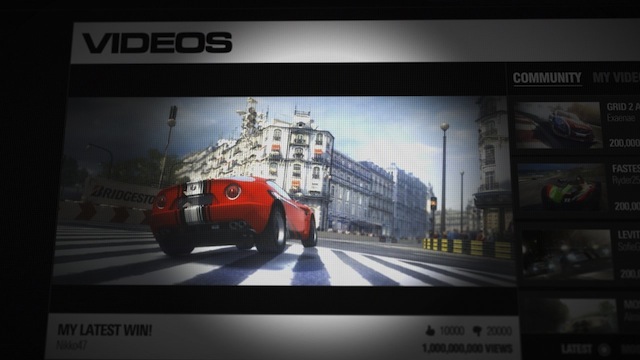 However, while there’s a good number of tracks and modes to conquer, many reuse track segments and assets too often to feel truly unique, and you’ll likely tire of them before long if you choose to pursue multiple WSR seasons. Likewise, some of the city-based tracks can feel a little bit lifeless and drab, whereas offroad races are filled with neat touches such as animals crossing roads and flurries of leaves. The influence of Codemaster’s Colin McRae series is keenly felt here, and it seems to be where the developers are most confident when it comes to track design.

Even if you put the car damage system to one side, Grid 2’s vehicles look great. Though those weaned on the auto-erotica of Forza’s in-car recreations will be disappointed to see only a bonnet view as close as you’ll come to the driver’s seat, the cars have been lovingly created. Particularly praise worthy is the reflections of each bonnet, picking up details like firework displays and skyscraper lights as you tear around night-time tracks. Presentation across the board is of a high standard, with clean, inviting menus, roaring engine sounds and a soundtrack that kicks in at the most heart-pounding moments of tightly fought challenges and races. 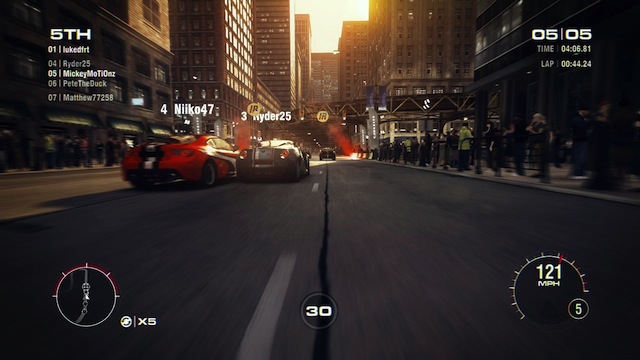 Multiplayer is delivered through the thorough RaceNet system, which tracks all of your Grid 2 online achievements. It smartly sets you up against racers of a similar ability to yourself, and even assigns you a real-world “Rival” to challenge for grudge matches, rotating rivals to give fresh opposition over time. Live events too will offer unique challenges throughout Grid 2’s online lifetime, letting the hardiest of racers battle it out for the most prestigious rankings. However, Grid 2’s multiplayer suffers from the same track shortcomings as the single player mode, and it’s frustrating that you can’t carry over your fleet of unlocked cars from single player to multiplayer too. You’ll have to be committed to a wholly separate progression system to make use of the best cars online.

Grid 2 is a confident return for the franchise, with enjoyable car handling and a unique single player mode. It suffers from recycled tracks and its playful approach to licensing may not be for those looking for a truly authentic racer, but there’s lots here to enjoy nonetheless.