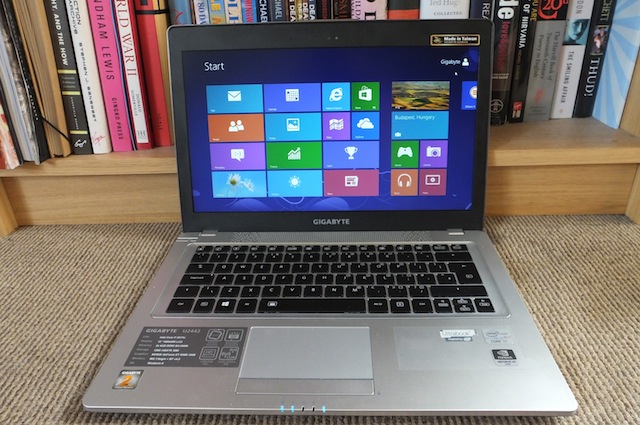 Gigabyte turn their attention away from motherboards to the ultrabook market with the release of the Gigabyte U2442F. A well-rounded portable machine with dedicated graphics, find out just how well it performs in our full review.

Measuring 339mm x 233mm x 19mm, and weighing 1.59kg, the Gigabyte U2442F ultrabook is a modestly attractive laptop – not quite as thin or light as some of the more dazzling ultrabooks, it remains stylish thanks to its reserved brushed aluminium finish, and particularly appealing thanks to its relatively powerful internal components. 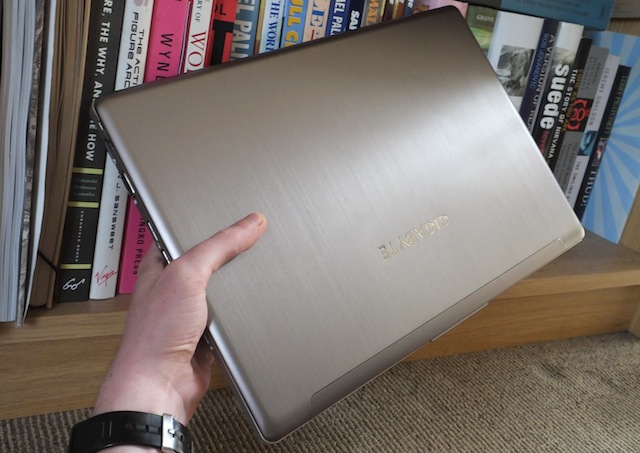 Our review model came equipped with a 2GHz Intel Core i7-3517U power-efficient processor, 8GB of RAM and an 128GB SSD (an additional 8GB of RAM and as much as a 1TB HDD can also be optionally configured when purchased). Turbo boosting to 3.1GHz, it’s a processor not to be sniffed at, even though standard mobile processors can offer a bit more grunt at the expense of power reserves. 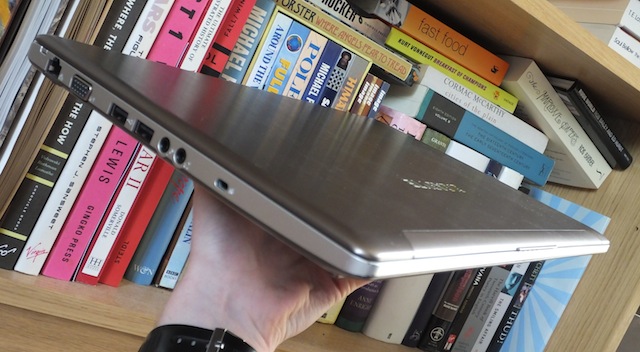 The real selling point here then is the dedicated 2GB Nvidia GeForce GT 650M. Though now superseded by the GT 700 series of Nvidia laptop GPUs, last year’s range still offer superb gaming performance for all but the most demanding of titles. And with ultrabooks usually resting on the integrated graphics capabilities of the Intel chips, this makes the U2442F one to watch for gaming enthusiasts. For instance, we ran Dirt Showdown benchmarking test at High quality at the laptop’s native resolution of 1,600 x 900, and saw it average frame rates hovering between 50fps and 60fps. Even the still-demanding Crysis 2 at Ultra quality settings at the same resolution was reasonably playable at 20fps, and dialling the graphics settings back more made for a pleasant play session. All in, very impressive for an ultrabook that doesn’t brand itself as a dedicated gaming machine.

With gaming performance like this, you can expect the U2442F to serve you well with everyday computing tasks too. Running Windows 8, its 128GB SSD lets you boot up the machine instantly, waking from sleep just as quickly. That 128GB SSD will fill up fast if you’ve sizeable media libraries however, or if you’re looking to exploit the machine’s gaming potential, so consider configuring the machine to include the optional HDD. It is worth noting though that Gigabyte mercifully leave the computer free from bloatware, meaning that you’ve got a pretty clean install of Windows 8 on here out of the box. 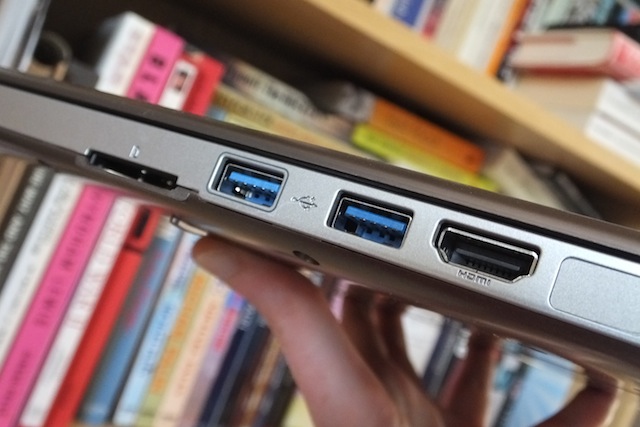 There’s a good selection of ports around the left and right edges of the machine too, offering up four USB ports (2x 3.0, 2x 2.0), both VGA and HDMI ports, an SD card reader, Ethernet connection for wired web access and both mic and headphone jacks.

Moving onto the keyboard, it’s a backlit Chiclet style affair. While the keys themselves have a lightness that makes them feel a tad cheap, they’re well spaced, making for a comfortable typing experience. Proving more enticing was the trackpad – offering a slightly textured finish and paired with a single button bar for clicks, it was responsive and made triggering Windows 8’s vital gesture controls a breeze. 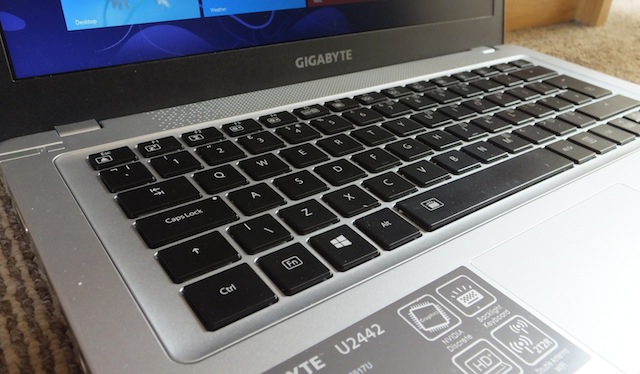 The 14-inch display, maxing out at a 1600 x 900 resolution won’t impress those now sporting full HD resolutions and above, but fits the bill for this reasonably-priced ultrabook well. We must admit however that with Windows 8’s focus on touch controls, we’re increasingly of the belief that Windows 8 ultrabooks should be equipped with touchscreen displays in order to make the most of the OS. 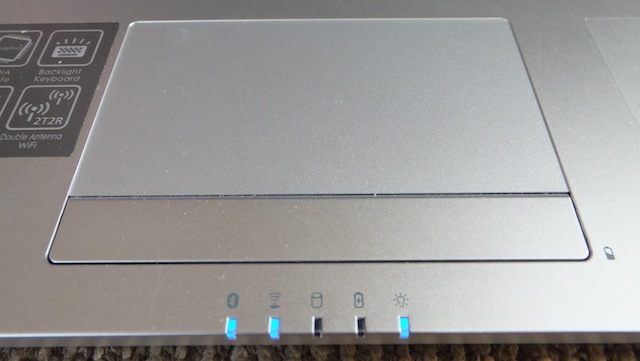 Gigabyte have opted for a matte finish on the display, making it infinitely more useable outdoors or in rooms with harsh point lighting. The trade off here is in colour vibrancy and brightness, which is reduced compared to glossy LCD displays. Workers will probably find the matte finish very beneficial, while gamers may prefer the more striking richness of a glossy display. Keeping in mind a matte finish is often a premium configuration option though, its again showing the value of the U2442F. 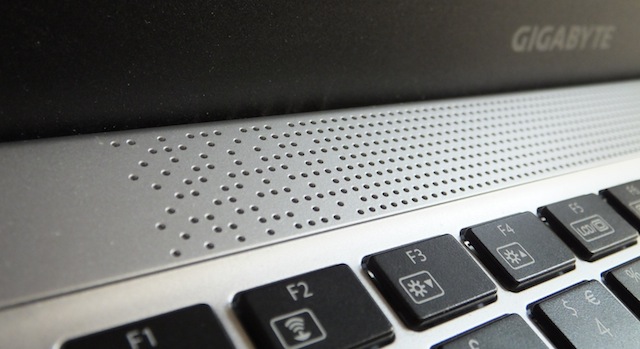 If there’s one real weakness here, it’s in the speaker array, which sits in a strip just below the screen (in a rather nutty dot-grille pattern, no less). There’s a tinny sound from the speakers, and no real sense of stereo direction. Best to pair the machine with a set of headphones for games and multimedia playback then.

In terms of battery life, the U2442F also performed well. We squeezed 5 hours out of the battery with the brightness dialled back to halfway. Considering that included firing up the GPU for a session with XCOM Enemy Unknown, that’s not half bad, and those just looking to work through some spreadsheets could expect to get nearly a full working day out of the Gigabyte machine without running to the mains.

A very worthy ultrabook, the Gigabyte U2442F is in the enviable position of being able to provide some decent gaming chops in a portable, fast-booting style. It’s not the thinnest, nor the lightest, but its one of the more flexible machines performance-wise, and offers good bang for your buck.