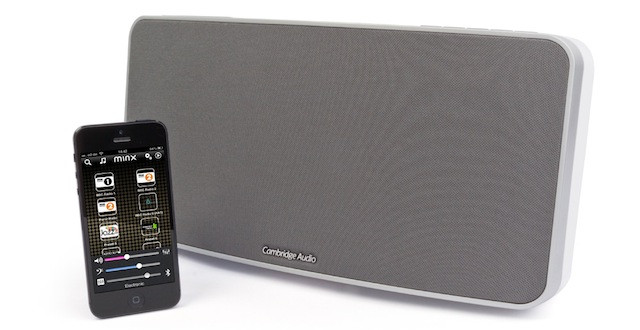 Packing in Bluetooth and Airplay connectivity alongside a clever internet radio system, the Cambridge Audio Minx Air 100 is looking a well-rounded mini speaker system. But is it worthy of its high price tag? Read our full review to find out!

The dock is dead; long live the wireless speaker! Walk into any high street gadget retailer these days and the once ubiquitous iPod dock has been more-or-less wiped out by speakers offering Bluetooth and Airplay connectivity instead. Spearheaded by Apple (and somewhat forced upon many with the iPhone 5’s introduction of the Lightning connection), it’s for the most part a welcome evolution, given the device-agnostic availability of Bluetooth. Cambridge Audio’s Minx Air 100 fully embraces wireless standards, and has a a unique internet radio feature that sets it apart from similar speakers.

Measuring 354mm x182mm x 118mm, the Minx Air 100 is a relatively compact, relatively understated speaker in terms of design. We think it’s very attractive speaker, with a clean mix of grey/silver shades and white plastics that should blend in nicely on a shelf or side table.

Sturdily built, the Minx Air 100 has a sloping white plastic rear casing, with an exposed recess on the back that doubles as both bass port and a handle (though it’s lack of a built-in battery may limit its mobility – it’ll always need juice from a wall socket). A grey fabric grille sits on the speaker’s curving front, while band of silver plastic wraps around the front edge of the speaker, housing a number of rubber buttons that include power, volume and Bluetooth, Airplay and analogue input controls.

And though it’s billed as a wireless speaker with Wi-Fi, Bluetooth and WPS connectivity, it doesn’t leave music players without wireless capabilities completely out in the cold: on the rear you’ll also find a 3.5mm input and a phono pair.

Cambridge Audio however still haven’t found a more elegant solution to connecting the speaker to a wireless network than countless over speakers without a display have also struggled with. To get the Minx Air 100 speaking with your wireless music players, you’ll need to hit the WPS button on the device’s rear, creating the speaker’s own mini Wi-Fi network, which you’ll then need to connect to with your PC before being lead through a browser-based set-up process that teaches the Minx Air 100 your standard home Wi-Fi network’s credentials. It’s a clumsy system that, admittedly, many similar speakers suffer from, and one that may perplex the less tech-savvy music fans out there.

Once set up however, the speaker is able to play music wirelessly from all manner of sources, from Bluetooth-enabled PCs and laptops to tablets, smartphones and Apple’s Airplay-equipped iOS devices. Everything from locally stored tracks to streaming services like Spotify can then be blasted out of the Minx Air 100.

Though small in stature, the Minx Air 100 does a good job of creating room-filling sound. Being a compact package, it smartly sidesteps attempts to deliver a true stereo image in favour of a wider mono-arc. Using BMR driver (balanced modal radiators), the Minx throws its tunes out at 180-degrees – a sound just as pleasing as an attempt to mimic a stereo effect within such a small distance as it removes the notion of a “sweetspot”. Two BMR 10cm drivers are onboard, using Cambridge Audio’s own design to deliver 100W of power.

Using a 24-bit DSP, the Minx Air 100’s bass performance also impresses. The bass port on the rear allows for low-end to be pumped roomily out of the back of the speaker, delivering some stonking lows, which can be tuned to your liking with a dial on the rear. Crank it up, and it truly rumbles.

It gets a little muddled however with the mids and trebles. Though high-end presence is palpable, there’s little clarity, with vocals sounding removed from the rest of the delivery. Though its output levels are amazing for a speaker its size, you’d get a more satisfying mix, especially in the mid range, from far less expensive systems.

The Minx Air 100 is a bit of a mixed bag then. In terms of design we think it looks very neat and reserved, making it a lovely choice for anyone looking for a discrete bookshelf speaker. It’s wireless functionality is delivered just as well as any rival Airplay speaker, with the added bonus of smart internet radio functionality. However, while bass and output levels are impressive for a speaker its size, the lack of a solid tweeter hinders the overall sound quality. A decent enough speaker then, but audiophiles will find their money more satisfyingly spent elsewhere.