Not content with new MacBook Air laptops and the unveiling of the OS X Mavericks desktop operating system, Apple offered a sneak-peak at a new line of Mac Pro desktop machines at today’s WWDC 2013 keynote.

Cylindrical in shape and far smaller than the current model, the curvy Mac Pro for 2013 will pack in a 12-core Intel Xeon processor, 256-bit processor, ECC memory and 1,866MHz DDR3 memory. 1.25GBps read speeds will be possible thanks to Flash storage and PCIe, making the Mac Pro’s storage “10 x faster” than anything that could make its way into a MacPro before, according to Apple reps at the showcase. 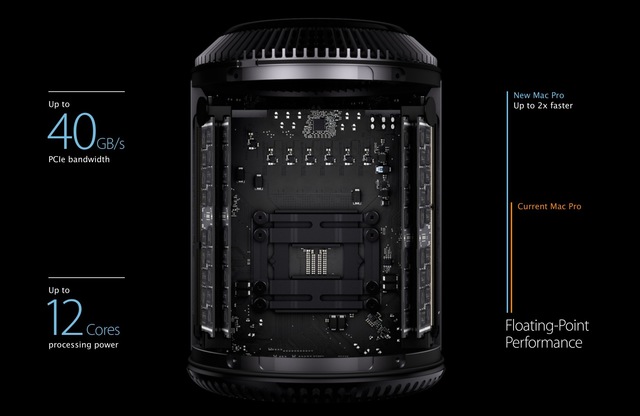 Dual GPUs come as standard, with new Mac Pro’s equipped with AMD FirePro graphics, while Thunderbolt 2 (with 20GBps throughput) is supported throughout. 4 USB 3.0, 6 Thunderbolt 2 ports will be on offer on the rear, helping to pushing the machine’s 4K capabilities.

Though no firm release date or pricing was on offer, Apple say to expect the long-time coming machine to launch “later this year”.