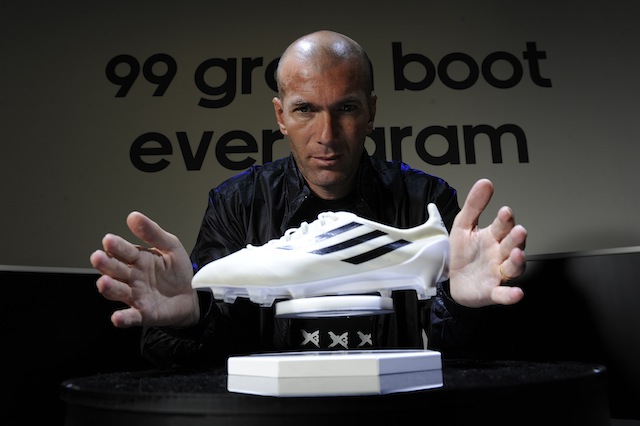 Adidas are keen to promote their tech nous these days, recently showing Tech Digest cycling warm-up hot pants and super-bouncy running shoes. Today, at a special press preview at their pop-up Adidas Lab in London, they’ve turned their attention to the beautiful game, launching a series of innovative new footballing products that include the world’s lightest football boot and a “smart” football.

The star of today’s show was certainly the adizero 99g boot. Weighing (as its name suggests) just 99g, the boot weighs less than an iPhone, 66g less than the current Adidas F50 boot onsale, and is made of a durable, flexible polyester/polyurethane mesh.

Almost paper thin, it’s hard to believe you’d get any protection from the shoes, but it’s all the innovations in the sole that count according to the Adidas reps on hand at today’s showcase. (We argued that the thin weave that makes up the upper part of the boot wouldn’t hold up to a stamping by another player – their response was to ask would any boot with an extra few millimetres of leather protect enough against a whack or stamp from a full grown man seriously going at it? From our experience, they had a good point). 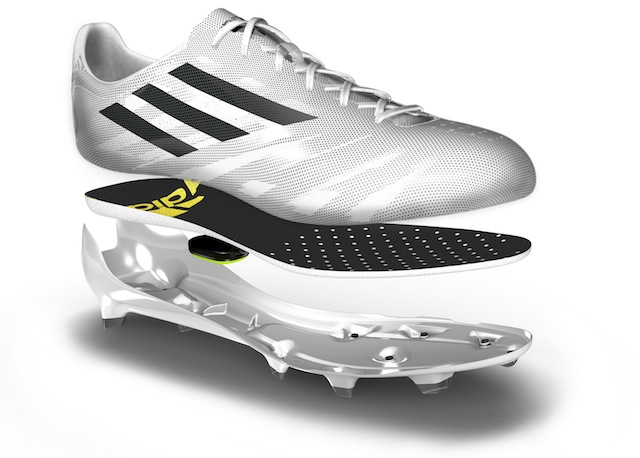 The sole then is an even greater marvel of engineering. Not only lightweight (even when housing one of Adidas’s miCoach fitness tracking smart modules), they’ve been vigorously tested to protect against the exaggerated torque, twists, bends and rotations that have lead to foot bone breaks in a number of leading players of late. In this sense they’re among the most protective boots available.

Or at least, nearly available. Adidas gave no indication as to when a boot so lightweight would hit stores. But given the advantages of lightweight footwear on the pitch, making players more nimble and reducing the amount of energy they burn, you’d expect many top teams will be clamouring to get an iteration of the boots on their player’s feet.

What may prove more of a challenge is the psychological hurdles needed to be jumped to get players to wear them. They just feel so lightweight! To the point, potentially, where players may be fearful of the amount of protection that they offer. 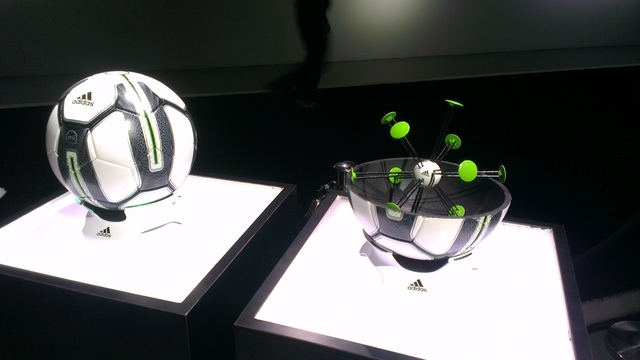 Also on show was the Adidas Smart Ball, a football jam-packed with sensors that pairs up with a smartphone app to track player performance.

Intended primarily for coaches, the ball can track data including speed (or power) of a shot, bend or curl, spin, height and dip, so long as the kick takes the ball over 10 metres. It looks set to become a key tool for strikers, especially those who are regular free-kick or penalty takers.

Highlighting the significance of the launch for Adidas, not only was the company’s CEO Herbert Hainer in attendance, but footballing legends Zinedine Zidane and Michael Ballack too, each singing the praises of the new kit.

“I have been working with adidas for 17 years and throughout my career I have always known they have been leading the way when it comes to innovation in football,” said Zidane at today’s event.

“The Adidas Lab shows how the brand is shaping the future of football and is a great chance for fans to see it with their own eyes.”

Tying in with this weekend’s Champion’s League final, all the innovations will be on show and available to be tried out by the public at the Adidas Lab in London. Head down to Victoria House in Holborn to put the new gear through its paces.