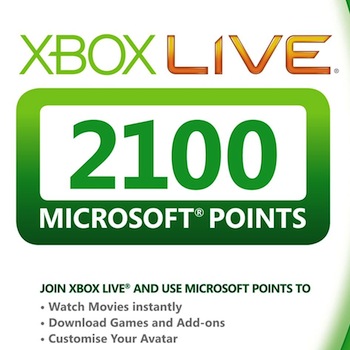 The Xbox 360’s contentious Microsoft Points currency, currently used to purchase digital content for Microsoft’s gaming console, is to get the axe ahead of the release of their company’s next-gen Xbox console release.

It’s a move that’s been on the cards for quite some time now, with rumours circulating as early as the start of last year, but The Verge are now reporting that Microsoft will retire the payment system perhaps as soon as this summer’s E3 gaming conference, and definitely in time for the launch of the next-gen console, tentatively called everything from Infinity to Xbox 720.

Microsoft Points (otherwise known as “Xbox Points” or “Xbox Live Points”) have been a cause of frustration for Xbox 360 gamers for many years. Bought in irregular bundles, it can be a chore to figure out how much the points are worth in real-world currency, with many gamers left with virtual change too small to purchase Xbox 360 content with, and with no means of refunding them back into real currency. The PS3 on the other hand lists all prices in local currency, making pricing transparent.

According to The Verge report, Microsoft’s next payment system will be far simpler, and similar to the process adopted by Apple’s App Store. A credit or debit card can be tied to an account, with all purchases made through the platform charged to it. If the account is intended for a youngster, credit can be gifted to an account, alongside standard gift cards made available of various values.

Microsoft have already made the decision to not carry over the loathed currency to their Windows 8 operating system app purchases, and with the next Xbox expected to be part of Microsoft’s attempt to unify all the company’s properties under the Windows 8 banner, a bespoke gaming currency would indeed seem anachronistic.