Price: £1.99 from the Apple App Store (Android and PC versions to follow)

The long-awaited Kickstarter-funded space-sim Star Command has finally touched down, putting all your Star Trek bridge power fantasies in the palm of your hand. It is however, long overdue. Can it possibly match the weight of expectation loaded upon it? Read our full review to find out!

Before we go any further, lets get one thing straight: any comparisons between Star Command and last year’s indie-hit FTL: Faster Than Light, are misguided. Though they share a retro graphical style, and are obviously both spaceship management games, they’re very different. Whereas FTL is a sprawling, randomised rouge-like, Star Command is a focussed, more action-orientated affair.

They may share surface level similarities, but they’re both very different. And like FTL, Star Command is very, very good. 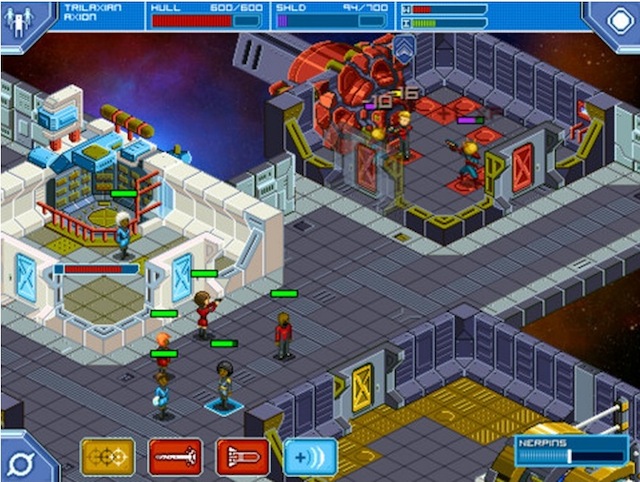 Star Command puts you in control of a very Star-Trek-esque ship and crew. As a Star Command captain, you’ll travel through the galaxy, encountering alien races and hostile space pirates, directing a crew to man critical ship systems and firing upon hulking cruisers bearing down upon you.

There are four main components to the game; a simple ship-building mechanic (allowing you to spend tokens earned to add new facilities to your cruiser), space battles which make up the brunt of the game and include potential boardings from enemy parties, and point-and-click style dialogue trees with enemy captains, allowing you to influence how well prepared you are for enemy encounters by intimidating or reasoning with rival crews. 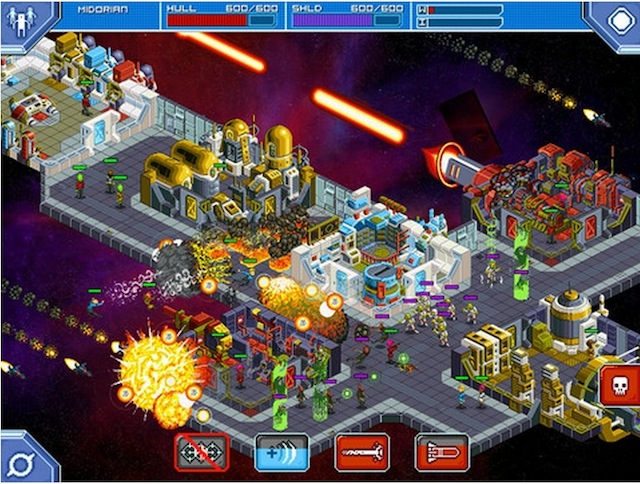 Space battles are part strategy, part mini-game reflex tests. You’ll have to balance attacks from your weapons based upon the ship your facing and its abilities, while also repelling invaders with X-COM-style crew controls, setting phasers to kill.

Some weapons and ship manoeuvres require tokens be made with which to power them, and you’ll have to assign crew to their construction in order to use systems. Once activated, most systems require the successful traversal of a mini-game in order for them to work: lasers need you to hit moving targets in order for them to hit enemy ships accurately, dodging an enemy barrage needs you to hit the dodge button when a pulsing red target on your ship is at its least visible. All this usually while helping your crew from being overcome by alien boarders.

The game is at its best when all this is happening at once. It’s chaotically fun trying to balance all your ship’s needs at once, and frantic attacks that lead to victory are all the more satisfying for it. Crew AI can be a bit ropey at times (they’ll stand amid flames, burning away unless you move them to safety), but the mix between strategic token resource management, RTS-lite crew control and action-orientated mini-games make for fast-paced fun. It’s also well suited to short play sessions, with the average mission lasting no more than 10 minutes.

A moment must be taken to praise the writing in the game too, all delivered through text with no voice overs. It’s often hilarious, playing with genre cliches without ever being mocking. It’s a game for space-opera lovers, obviously by space-opera lovers. The exchanges between yourself and the various nefarious space villains you’ll come across are real rib-ticklers: being called a pig-monkey by an ant pirate intent on eating your crew is one of my favourite in-game conversations of the year. 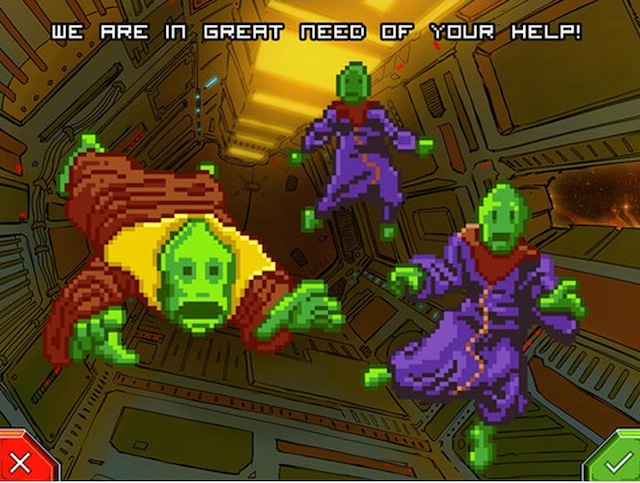 Crew and ship upgrades are earned as you progress through the game. Crew pick up XP for successfully participating in battles (without biting the laser-bullet), while each successful battle earns you tokens with which you can hire more crew, build new ship facilities and improve existing ship areas, such as weapons medical rooms. Levelling up your crew and customising their looks gives you an attachment to them similar to that of X-COM – death here is permanent, and losing a seasoned member of your team is a killer (even though more an be recruited from home planets).

Visually, the game is one of the most charming games we’ve ever seen come out of the App Store, bringing to mind Sword and Sworcery EP with its 8-bit graphics (another iOS classic). From chunky ship design to the simple and often hilarious animations, the game manages to pack a lot of character into its colourful pixels.

It’s also a bit of a busy style, sometimes to the detriment of the action. When fires are blazing aboard your ship, alien enemies are invading your space-bound crib and UI elements flash demanding your attention, it can be hard to pinpoint exactly where you should be tapping next. It’s as much a limitation of the small smartphone and tablet screens as it is a failing of design, and the game is far better suited to tablet play as a result. 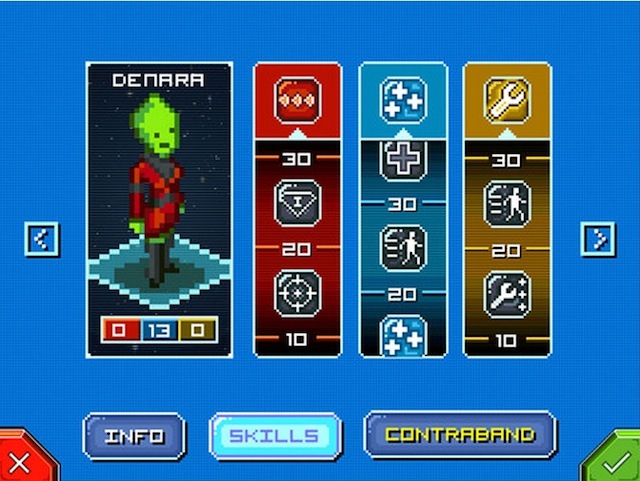 Even when the difficulty ramps up (and it will get pretty hard once you get a few hours in), you’ll always be inspired to keep going by the sumptuous score. It’s packed with tunes as rousing and evocative as any John Williams Star Wars soundtrack. I’d happily give it a whirl on my iPod separate from the game; it’s that good.

Though incredibly fun, it has to be noted that this is not the Star Command that was originally pitched on Kickstarter. A prolonged development cycle (seeing the game’s release slip from 2011 right up to this morning) has seen many features culled: there are no planet landings, no abandoned ships to explore, no civilisations to conduct diplomacy with.

What’s still here is great, but it’s significantly reduced in scope from what was initially planned. Developers Warballoon promise that these features will still come at some point (with the planned PC version set to be a testing ground going forward ahead of iOS updates), but its worth noting the changeable nature of Kickstarter projects: you’re backing a vision and a promise, not a set-in-stone product.

It may be stripped back when compared to the original epic pitch, but Star Command’s focussed gameplay, fun presentation and stirring soundtrack still makes it an iOS must-have. With the promise of more features in the pipeline, this is one gaming galaxy we anticipate spending a lot of time in.