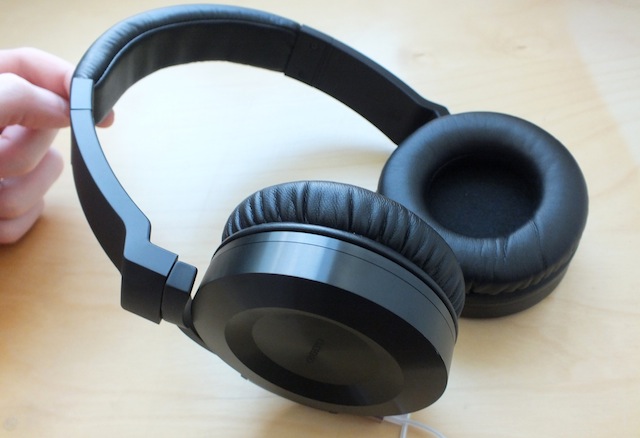 Home cinema champions Onkyo turn their attentions to the increasingly-competitive headphone market, launching the premium ES-HF300 over-ear cans. Do they live up to the brand’s respected home cinema pedigree? Read our full review to find out!

Onkyo have taken a tasteful, no-nonsense approach to the design of the ES-HF300 headphones. Available in black, white and purple finishes, we’ve been playing around with the seriously cool black model. A solid construction combining both aluminium around the cans and ABS plastic in the headband, they’re satisfyingly chunky in the hand, but manage to stay a comfortable 240g in weight. Compared to the garish Beats headphones (which we’d say are Onkyo’s biggest competition here), the ES-H300s feature discrete branding, with a small embossed Onkyo logo in the middle of the recessed outer side of each cup.

Each ear cup rotates so that the headphones can be more easily packed away into the supplied soft travel bag, though they wont lie completely flat, due to the width of the headband. Though the headband can be adjusted to fit different head sizes, it doesn’t fold, meaning you’ll have to take care not to snap them when in transit, though they do look sturdy enough to take a fair old beating. 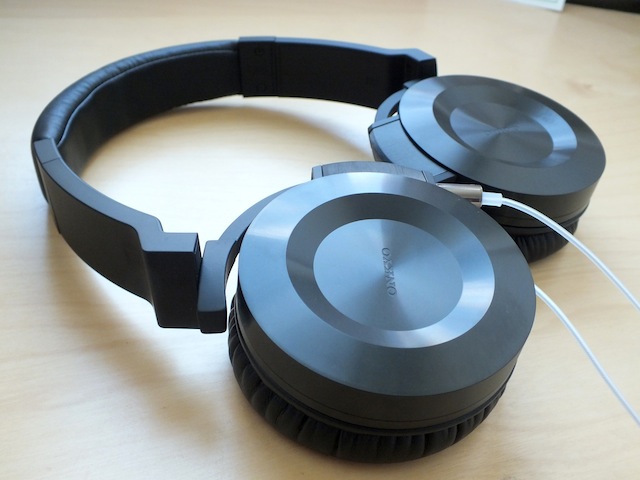 Both the headband and ear cups are generously padded, each with a leather covering, adding to the premium feel. The headband grip is a snug fit, so you shouldn’t be in any fear of them slipping off your head, but that also means your ears will get a little toasty.

Into each can goes a detachable “audiophile” grade copper cable, which Onkyo promise offers the best possible sound quality. Ending in a 3.5mm L-tipped jack on one end and splitting into two separate chrome finished MMCX micro coaxial connectors that snap into each can, the cable itself is a silvery white colour, with a slightly rubbery feel. They thankfully don’t get into too much of a tangle, though do tend to bounce about a bit and sit at unusual angles rather than hanging or laying flat.

Sadly, the cable doesn’t offer an in-line remote, meaning you’re going to have to pull out your music player of choice if you want to adjust volume or skip tracks. Onkyo promise that versions with a remote will be available later this year. It’s worth noting that the audiophile-grade cable is the only discernible difference between the high-end Onkyo ES-HF300 headphones and the company’s cheaper ES-FC300 headphones. Seeing as the cabling is detachable on both, and Onkyo offer the audiophile cable as an optional upgrade for ES-FC300 owners, it’s worth considering the cheaper alternative and buying the more expensive cable if you find you really need it later on.

Onkyo have stuffed top-notch audio components into the ES-HF300s, including 40mm titanium drivers in the closed-back cans, and two bass chambers in each cup for rich low end with presence without overpowering the mid-and-hi ranges. It’s a really lovely, balanced sound, warm without stifling high frequencies, and with detailed response across the board. Offering a 10Hz to 27kHz, they handle lossless audio as well as the best of the competition in this price bracket. 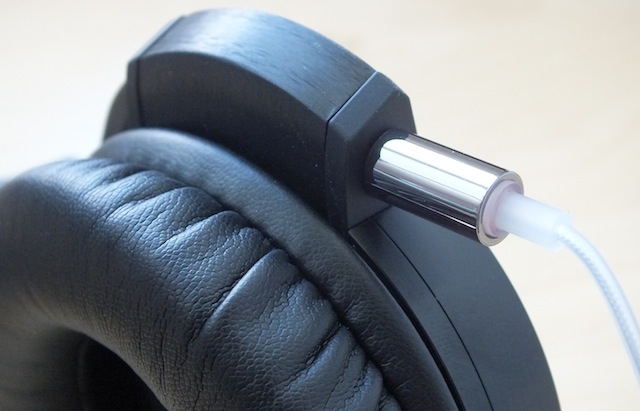 We threw every musical genre we could bring our ears to listen to at the ES-HF300s, and couldn’t find a weak link anywhere. Phoenix’s new Bankrupt! album, awash with synths and 80s bass hooks sounded suitably thick and punchy, with the ES-HF300s picking up detail from within the relatively-busy mix. Heavier fare, like Black Sabbath’s War Pigs saw the bass and crunchy guitar sit complementarily alongside each other, with the hi-hit shimmering in the rear of the intro. Moving onto lighter sounds, the acoustic strings of Daughter’s Youth were clear and well balanced, with the cans really shining as the movement of the first building synth and string sounds pan from left to right in the mix. The beautiful Claire De Lune by Debussy again showed off the warm tones of the headphones, but still allowing the treble some breathing room as the high tinkling keys run into the deeper bass keys.

Onkyo’s first foray into headphones is a great success. Sounding and looking beautiful, all that’s missing from the package is an in-line remote for mobile playback control. A well balanced tuning, they’ll compliment many different genres of music, and look cool while you listen. They’re not cheap, and it may be worth giving the lower-end ES-FC300s a try if you’re counting the pennies, but splurging the extra cash here won’t leave you disappointed.