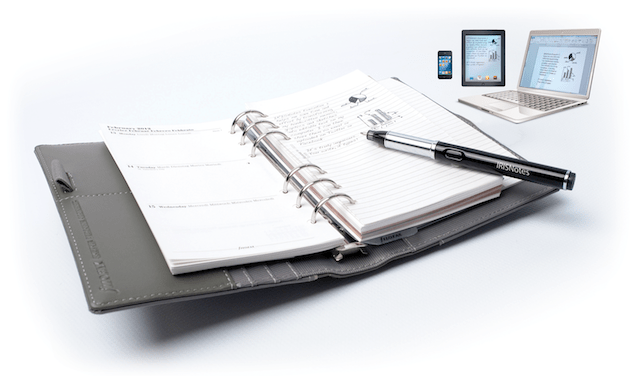 Price as reviewed: £149 direct from IRIS

Put pen to paper to PC or iPad with the IRISNotes Executive 2 kit, letting you digitise and upload your handwritten notes. It’s a solid performer, but is it worth the high asking price? Read our full review to find out!

The IRISNotes Executive 2 kit consists of a digital pen and receiver that work in tandem to turn your handwritten notes into digital text that can be edited with a Mac, PC, iPad, iPhone or iPod touch. You use the pen as you would a standard biro (it uses conventional ink), and sit the receiver at the top of any standard sheet of paper. The receiver is able to track what you’re writing with the pen, and then hooking up the receiver to a computer or iOS device over USB or 30-pin/Lightning adapter lets your writing be converted to digital text through the provided software. The resulting text can then be exported to Outlook, Word or Notepad for further editing on a computer, while the IRISNotes HD app for iOS lets you convert text for the word processing package of your choice.

The pen is a comfortable weight and only marginally thicker than a standard ball-point pen, with the kit able to store as many as 100 pages of text at a time before you’ll need to offload them to a computer.

The IRIS OCR software does a good job of converting handwritten notes to digital type, but the legibility of your handwriting is important. I have a particularly sloppy style these days (too much time spent typing away!) and the IRISNotes Executive 2 sometimes struggled to accurately recreate my intended words. However, when I made a conscious effort to write more tidily than my usual toddler’s scrawl, it was very accurate, so expect results to vary depending on your handwriting. Avoid cursive scripts for the best results, while left-handed folk will have to angle their hand in order to prevent blocking the line-of-sight of the receiver.

In terms of battery life, you should get around 8 hours of continuous use from both the pen and the receiver, more than enough to get through the average working day. Battery packs are built in so there’s no need to hunt around for replacements, while the pen sensibly uses standard ink cartridges that can easily be replaced at a stationary shop.

Using regular ink, you’ll still be able to scribble away with the pen even when it’s out of power, though text can’t be retroactively digitised – it’s not simply enough to pop the receiver at the top of a written page and expect it to be turned into a digital page, as text has to be captured by the receiver as it’s being written by the included digital pen.

So is the IRISNotes Executive 2 worth its £149 asking price? To answer that question, you really have to look towards the competition.

The Evernote note syncing apps for iOS, Android, Windows and Mac are free, letting you upload and sync all sorts of media (pictures, text, web clippings, audio) across all your devices – something IRISNotes Executive 2 does not. Evernote have also recently teamed up with Moleskin to offer Smart Notebooks that, when written in and photographed with the Evernote Page Camera app function, can be turned into digitised pages. Books start at little more than £10, but when they run out, that digital page capture runs out too as regular paper can’t be used. The IRISNotes Executive 2 has the advantage in this respect.

A more close competitor is the Livescribe pen range, which works in much the same way as the IRISNotes system, but requires the use of special paper and does not convert notes to word processed documents. It however also allows audio to be recorded at the same time, allowing your notes to act as virtual bookmarks across meetings, interviews or lectures. It’s a recommended alternative to the IRISNotes kit, even if its feature set varies slightly.

The IRISNotes Executive 2 works very well, effectively digitising handwritten notes for editing in word processing apps, provided your handwriting is neat. It’s not cheap, and there are equally good alternatives with similar functionality, but those who make plenty of handwritten notes on all manner of paper scraps will find this an invaluable tool.