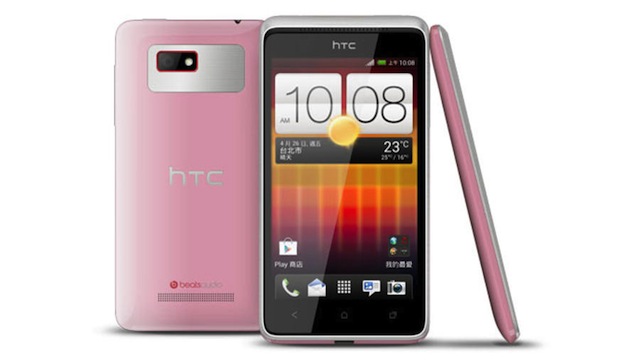 Popping in a 4.3-inch display, HTC have equipped the Desire L with a 5MP camera, a 1GHz dual-core processor, 1GB of RAM and a 1,800mAh battery. There’s a measly 4GB of storage included, but at least microSD support lets you boost that substantially if you require it.

Measuring 128 x 66.9 x 8.9mm and weighing a reasonable 118g, the Desire L runs Android Jelly Bean (4.1.2), the handset has a simple slate-like design with loudspeakers housed on the rear.

Both pink and black hues will be available at launch in Taiwan for the handset, but there’s yet to be any announcement of global availability.

Which is a shame: HTC battling Samsung’s Galaxy S4 with the HTC One at the top-end of the Android smartphone market, the Desire L looks capable of bringing the fight to Samsung’s own mid-range Galaxy Ace line-up, as well as Nokia’s competing Windows Phone 8 Lumia 720 handset.