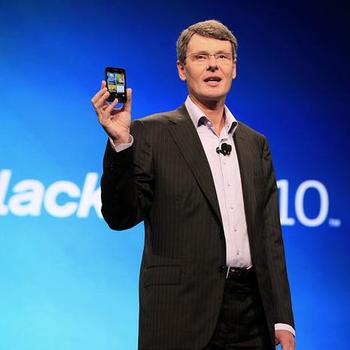 It seems as though the early success of the keyboard-packing Q10 handset has gone to the head of BlackBerry boss Thorsten Heins. The CEO of the struggling mobile phone company has predicted the death of the tablet, saying that the hardware category will go the way of the dodo by 2018.

“In five years I don’t think there’ll be a reason to have a tablet anymore,” Heins said in an interview with Bloomberg yesterday at the Milken Institute conference in Los Angeles. “Maybe a big screen in your workspace, but not a tablet as such. Tablets themselves are not a good business model.”

It’s an interesting stance from the BlackBerry boss, especially considering the waning desktop/laptop sales and booming Android and Apple tablet market. Though we can’t speak of innovations 5-years down the line, consumers are voting with their wallets in favour of tablets, suggesting that they may well eventually supersede traditional computing formats.

If anything, it seems as though the CEO is laying the ground work for BlackBerry’s exit from the tablet market, an attempt at justifying the inevitable move in the wake of dire PlayBook sales. Heins has been tightening the BlackBerry purse strings since taking over at the company, cutting 5,000 jobs.

So where does the future lie for BlackBerry? According to Heins, somewhat contradictorily with mobile computing.

“In five years, I see BlackBerry to be the absolute leader in mobile computing – that’s what we’re aiming for,” Heins said. “I want to gain as much market share as I can, but not by being a copycat.”