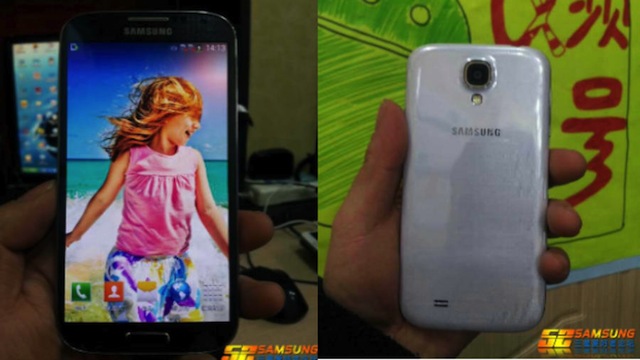 We’re just a matter of days away from the March 14 Samsung Galaxy S4 launch event, but it seems that the big reveal may have already been snatched from under Samsung’s noses. Posters on the Chinese forum 52Samsung claim to have the first photos of the device, which you can see above.

Carrying the S4’s alleged GT-I9502 model number, the white, plastic backed handset looks very close to the design of the S3, should the leak prove to be true.

But number of the photos even show off the S4’s specs, including a 1080p display and quad-core processor, ringing true with what we’ve heard from previous leaks. Android 4.2.1 still appears to be the operating of choice here, while 2GB of RAM and a 13MP camera also feature.

However, there’s no mention of the eye-scrolling tech rumoured last week, which may or may not rule out the inclusion of the intriguing new feature.

Of course, all leaks like this must be taken with a pinch of salt. The photo’s could quite easily be a top-notch Photoshop job. But given the proximity to the S4 launch event, it’s likely that there’s a few of these handsets now out in the wild. And the pictures above could be our first good glance at them.

Head back to Tech Digest on Thursday evening for more Samsung Galaxy S4 news, when we’ll be brining you all the official details on the eagerly-anticipated Android handset.