Samsung’s Galaxy S3 was one of 2012’s best, and best-selling, handsets. Chalking up over 30 million sales so far, it’s propelled Samsung to the top of the Android smartphone mountain, and making them a serious rival to Apple’s iPhone and its mobile market dominance.

It’s a near certainty then that Samsung will be following up the Galaxy S3 with a sequel, which we’re going to imaginatively presume will be called the Samsung Galaxy S4.

No big changes there then, but what of the specs? The Galaxy S4 rumour mill is starting to heat up now, and new snippets of information and whispered leaks concerning Samsung’s next flagship handset are starting to slide in each day. To help you stay on top of these rumours, we’ve put together this rumour round-up, collecting everything we know so far on Samsung’s next big smartphone hope.

We’ll be updating this post every time we hear new information on the phone, so bookmark this page and keep checking back in the coming weeks and months for more updates!

Samsung’s Galaxy S3 had a pretty special display. At 4.8-inches, it offered plenty of real estate for playing back videos and displaying web pages, while its 1280 x 720 resolution delivered a crisp 306ppi. The Galaxy S4 will have to match this at the very least, and we have heard word of a 5-inch, 1080p resolution display being included with the Galaxy S4. That’d lead to a super-sharp 441ppi.

More interestingly are the rumours that the Galaxy S4 will ship with a flexible display. Samsung have been testing bendy screens for sometime now, showing off their Youm prototype at CES 2013. if they could pull it off without undermining the quality of the display, it’d be a totally unique selling point. There’d no longer be any fear of sitting on your phone and crushing it under an ample gluteus maximus. 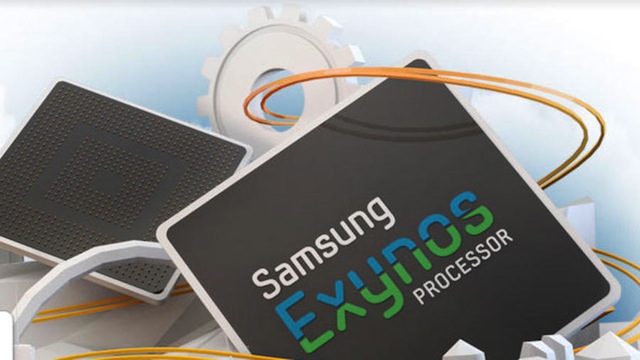 There are rumours running rife that the Galaxy S4 is going to be sporting a ridiculous eight-core (or “Octo-core”) processor. It’d definitely attract attention, seeing as the mobile chips currently available max out at the quad-core level. But it’s arguable whether anyone actually needs an eight-core mobile; as it stands, there are very few mobile applications that tax even a quad-core chipset.
Either way, those Octo-core rumours may be all for nought, as Samsung have just revealed a new quad-core processor, the Exynos 5440, on its Kernel Git webpage. It’s an updated version of the dual-core chip inside the Korean-made Google Nexus 10 tablet. Could this eventually power the Galaxy S4 too?
Little else is known about the Exynos 5440, and we’re not yet ruling out an eight-core processor, which would be exactly the sort of headlining feature the Galaxy S4 would need to go up against the rumoured HTC M7 and iPhone 5S.

We’re 99.9999999999% certain that the Samsung Galaxy S4 will run Android, seeing as though the rest of Samsung’s Galaxy S series has done so, and proved wildly popular in the process. What’s less certain is the version of Android that it’ll come with.
The recent release of the Google Nexus makes the most up-to-date version of Android currently stand at Jelly Bean 4.2.1. It’s great, but the core Jelly Bean experience will be almost a year old by the time the Galaxy S4 rears its head. Therefore, we’re expecting Samsung to opt for Android Key Lime Pie, the widely-rumored code name for the next major revision of Android.

Google have stayed tight-lipped about what to expect to find in Key Lime Pie, but experts have suggested the inclusion of app previews and gifting options for the Google Play app store, multiple user profiles per device, performance profiles to push hardware to its limits when needed and enhanced social network support with aggregator widgets (though Google’s conflicting interests over their own Google+ network may scupper hopes of deeper Twitter and Facebook integration.

You’ll likely also find an updated version of Samsung’s TouchWiz UI in there too, with improved picture-in-picture Pop Up Play features and app hubs. Samsung have a knack for making relevant small improvements to the core Android interface, and it’s a tradition we hope they continue with. S Voice in particular (Samsung’s answer to Apple’s Siri voice control) felt half baked in the Galaxy S3, and could be a really powerful tool if reworked successfully for the Galaxy S4.

Where once Samsung reserved their best gear for the annual MWC mobile phone show in February, last year’s launch of the Galaxy S3 saw them instead opt for their own personal launch event. Well, as personal as a take over of London’s Earl’s Court, complete with a full orchestra, can be.

With Samsung looking to compete with the circus surrounding Apple launch events, we can’t see them veering much from this approach when it comes to the Galaxy S4. As for when that event shall be, an annual launch would suggest May 2013.

However, recent rumours have hinted at a March 2013 launch (apparently revealed by a Samsung “representative”), while there’s also been talk of the launch of a phone dubbed “Project J” from Samsung landing as early as April 2013. It’s a balancing act Samsung have to be very careful with; launch the phone too early and you face annoying fans who’ve upgraded to an S3 less than a year earlier, while push too late and people’s attentions may turn to the latest happenings at Apple HQ in Cupertino. 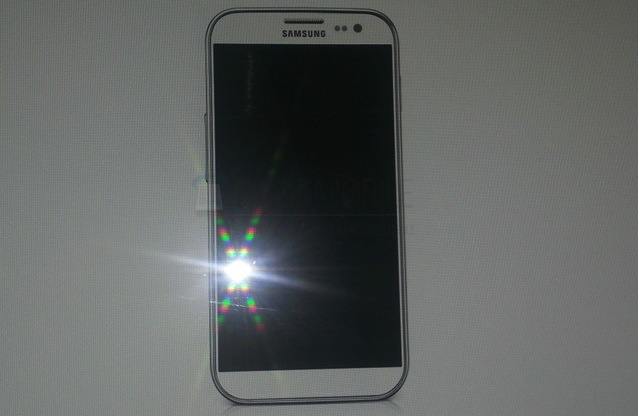 See that photo above? That’s the first alleged “real” sighting of the Samsung Galaxy S4.

Acquired from an “insider at Samsung” by SamMobile, it’s the clearest alleged look at the rumoured Android handset thus far, though the source was unable to provide any further details concerning the handsets design and features.

If the real deal, the photo suggests that Samsung have finally dropped the physical Home button that has been a staple of all Galaxy S and Galaxy Note handsets so far.

Indeed, though the device does look very similar to the design of the Galaxy S3, the slightly elongated screen suggests that a touch-sensitive onscreen Home button could be on the way. It’s something that Google have urged Android handset manufacturers to embrace since the launch of Ice Cream Sandwich.

We’ll take the image with a pinch of salt right now, as it wouldn’t be difficult to fake such a shot, but all the potential changes spotted here are at least credible ones. 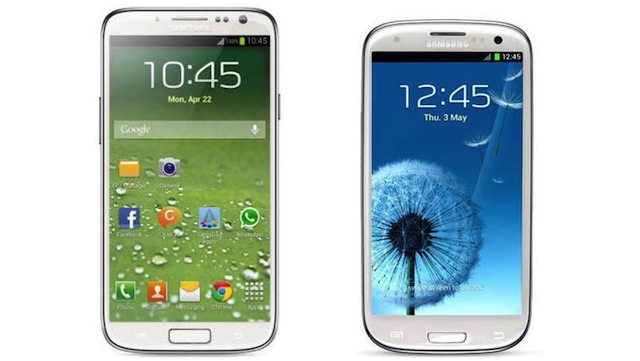 Samsung may be ditching the natural curves of the Galaxy S3 in favour of the Galaxy S2’s more square-shaped design when it comes to their forthcoming Samsung Galaxy S4 handset.

The latest rumour surrounding the hotly-anticipated smartphone has come from a picture posted to Picasa, which has been sitting patiently waiting to be picked up for months. It shows what’s assumed to be an S4 mock up with straighter edges and corners sitting next to the curvy “inspired by nature” Galaxy S3.

For the true conspiracy theorists out there, the render even has a date on the screen showing Monday April 22. Could this be the Galaxy S4 launch date?

With no verified source for the image, it’s likely a Photoshop hoax in all fairness. But with the Galaxy S3’s design cues receiving a mixed reception, perhaps a marriage of both the S2 and S3’s design styles is the perfect compromise.