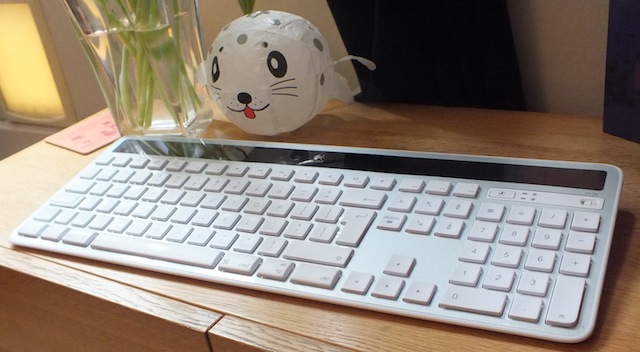 An eco-friendly keyboard for Mac that also saves you the hassle of wires and batteries? Too good to be true? Read on to find out in our full review of the Logitech Wireless Solar Keyboard K750 for Mac.

If there’s two things I hate in the world of tech, it’s wires and batteries. The former seem to have a life of their own, tangling around each other in even the most organised of workstations or home cinema set-ups, while that latter always seem to die when you most need the gadget they’re powering. In a desktop scenario it’s an even more pronounced problem, with wire-housing space at a premium and any lack of power preventing you from getting work done.

Logitech’s Wireless Solar Keyboard K750 for Mac looks to address both problems. A full size wireless keyboard for Mac, complete with all the Mac-specific shortcut keys you’d expect, it has a killer feature in the form of a solar panel which powers the device.

Two solar strips sit just above the keys, and though the K750 is sold as a “solar” powered device, that’s actually selling the keyboard short. In fact, the K750 can even be powered by ambient artificial light from lightbulbs, meaning you don’t need to leave the K750 out in the garden on a sunny day to juice it up. As such, leaving the keyboard out in even a moderately well-lit room will keep the device charged, and as the power needed to transmit key presses is so minimal, a fully charged battery will retain power in even pitch-black darkness for a good three months. Say goodbye then to costly wireless keyboard battery replacements. There’s also a switch to completely power the keyboard down if necessary, while the keyboard will intelligently switch off if a key is being constantly pressed for a few minutes, recognising this is unnatural behaviour. 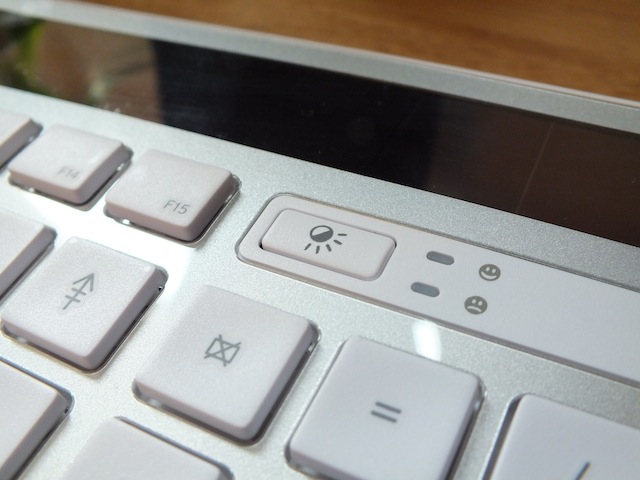 Should you ever need to check the battery charge, two methods are on offer. The first, and most efficient, is a simple button that sits above the numeric keypad. Hit it and a green light will flash if battery power is good, while a red one will flash if levels are getting low. The second option is to download Logitech’s Solar App from the Mac App store, which offers a guage with a Lux reading to keep you abreast of the current power situation. However, it’s a poorly optimised app, hogging system resources, and is hard to recommend. Stick with the simple hardware button method instead.

The keyboard connects to a Mac using a tiny USB wireless receiver, transmitting information between the keyboard and computer. It’s a shame that a Bluetooth option isn’t present, as it means you lose a USB port when using the keyboard. On port-scarce MacBooks, that may be a problem, but at least the signal is consistent – we never had an issue with the keyboard failing to communicate with our Retina MacBook Pro.

Moving on to the physical design of the keyboard, it’s an incredible comfortable set-up. Measuring 17 inches wide and 6.2 inched deep, it’s about on a par in terms of width with Apple’s own numeric-pad packing official keyboard, though the solar panel adds considerable depth. Flat, the keyboard is a consistent quarter of an inch thick, keys included. Two pop out legs on the underside of the keyboard raise the profile by just under an inch, while the rounded edges of the keyboard should be easy on your wrists.

Though spongier than the Chiclet keys found on our MacBook Pro, the K750 keys had a short enough travel to make long typing sessions a breeze. Spacing between each key is fractionally more generous than that found on Apple’s keyboards, meaning you may need a little time to adjust if you’re used to typing at speed on one of Apple’s alternatives. 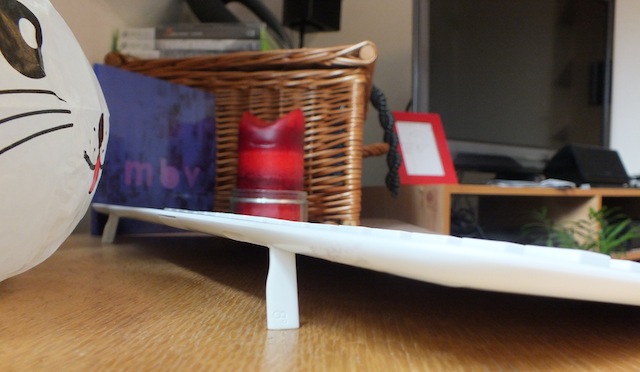 All standard Mac keys are present and placed where you’d expect them, including Command, Option and Control keys either side of the keyboard, as well as a full numeric keyboard on the right. F-keys also match Apple’s standard shortcut controls – F1 through to F4 work as brightness down, brightness up, Expose/Mission Control, and Dashboard, respectively; F7 through F12 allow for previous track, play/pause, forward track, mute, volume down, and volume up, respectively. Keep an eye out for the Caps Lock key though – there’s no indicator light stating when it’s activated (likely a battery saving measure) so you may want to double check when it’s on or not.

Our two main gripes then with the keyboard (apart from the shoddy optional Solar app)? Firstly, those kickstand feet – they feel more than a little flimsy, and if standing feel like they wouldn’t need much pressure applied to them before they’d snap. Secondly, the tiny USB receiver is so small it could easily become lost. It would have been great if Logitech had included a recess in the keyboard chassis where it could click in for safe keeping. Wireless keyboards tend to promote portability, and the chances of it getting lost in transit are high. 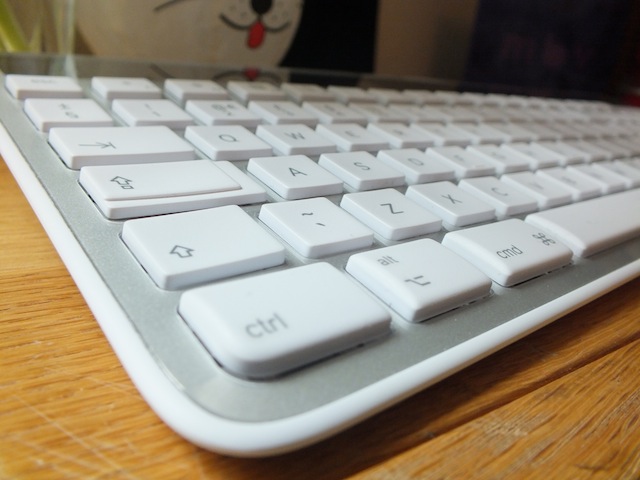 The K750 for Mac is a really neat alternative to Apple’s official keyboards. Eco-friendly without scrimping on ergonomics, over the course of its lifetime it’ll save you a pretty penny on batteries, not to mention the peace of mind that it’s unlikely to ever run out of charge. It’s foot construction could be a little sturdier, and its accompanying app a little better optimised, but they’re small faults in an otherwise superb product.