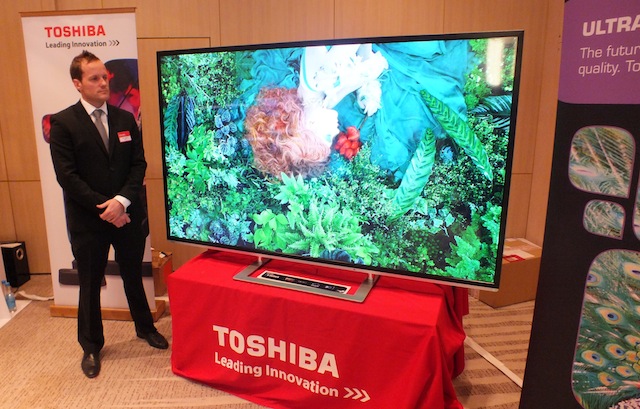 Bigger is better, and for Toshiba’s forthcoming 84-inch 4K Series 9 Ultra HD TV, that counts for pixel count as well as size. We went eyes-on with the new flagship set at a recent Toshiba press event. Here are our first impressions.

Measuring a massive 84-inches from corner to corner, Toshiba’s top-of-the-range 9 Series 4K TV is an intimidating sight to behold. Though also set to be available in 58 and 65-inch sizes, those looking for the “cinema in the living room” experience should look no further. It dwarfs all those who stand next to it (small-of-stature star Tom Cruise was by chance staying at the hotel where Toshiba held the press event, and we can’t begin to imagine what he’d have looked like beside the screen, Cuban heels and all). 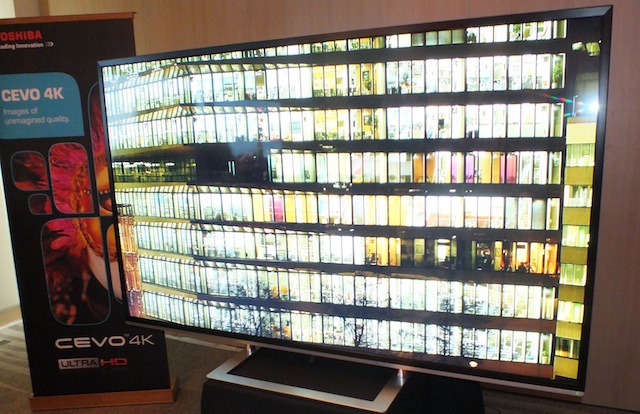 In terms of design, Toshiba have kept things relatively simple. A solid-looking chrome base supports the gigantic screen (it’d take some work to get this wall mounted), with the chrome styling extending to the lower edge of the screen. The rest of the bezel is finished in black with slightly rounded corners, and though not the thinnest bezel we’ve ever seen remains unobtrusive due to the sheer size of the screen. 4 HDMI ports will be on offer, as well as 2 USB ports and an SD card reader. Active shutter 3D is also supported, though was not on show during our time with the TV.

It’s the 4K resolution that really impresses though. Running at four times that of Full HD for a whopping 3840×2160 resolution count, it provides a pin sharp picture when native resolution content is thrown at it. A show real including colourful demo footage was shown alongside Square Enix’s next-gen E3 2012 reel, and the result was often stunning; colours were vibrant while the screen was bright, with movement (aided by the 800 Active Motion and Resolution system) smooth and judder free.

Though impressive, it wasn’t wholly perfect however. Edge-LED illumination is used to add brightness and backlighting to the panel, though it’s intensity often meant it seeped into darker scenes, even in a relatively well-lit room, a problem only intensified when viewing the screen from an acute angle.

Likewise, an 1080p-to-4K upscaling demo on a 58-inch Series 9 model showing off a clip of Disney’s John Carter movie proved troublesome. Toshiba’s CEVO processing engine added a lot of noise to the image as it tried to push it towards ultra HD standards, while the motion processing effects gave all movement onscreen a watery look. It’s common practice for companies to have all their TV’s post-processing effects cranked up to the max during demo days, which was likely the case here. We’d imagine with a more subtle approach the issues here wouldn’t have been so pronounced, so we’ll be keen to see the screen performs in a real-world setting. Given the current lack of 4K content on the market however, the screen will regularly rely on its upscaling chops, so it’s worth noting. 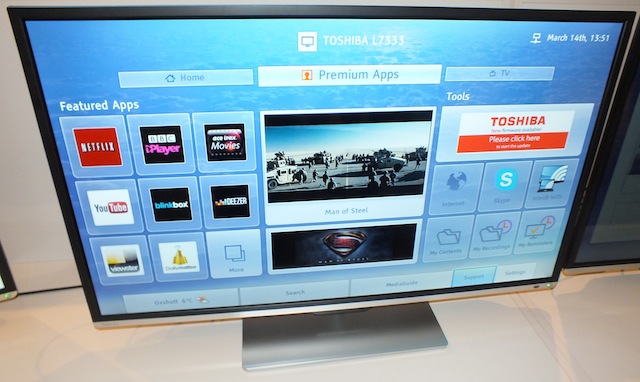 Built in Wi-Fi powers Toshiba’s new Cloud TV interface on the set, a feature that goes right across the company’s 2013 connected TV range.

Looking to unify Toshiba’s connected TV services, it allows users to personalise their interface through individual logins, with the potential to organise a homescreen to show apps and video streaming services that most interest individual users. As users use the Cloud TV interface the TV will begin to recognise viewing habits too, and suggest recommendations to view.

Plenty of the big-name video apps are included, such as Netflix, YouTube, BBC iPlayer and Blinkbox, while a universal search engine built by Rovi hunts down content across all services, including the built-in Freeview HD. It sounds great in theory, and if in practice the engine supports metadata pulled in from other connected devices such as Sky TV boxes, Freesat or YouView, it’ll really come into its own. 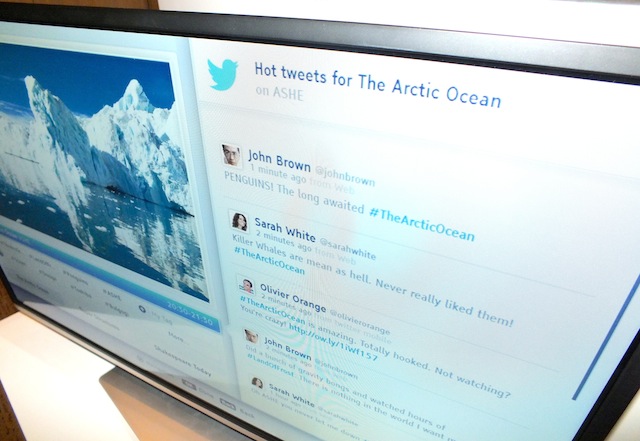 There’s also a full Twitter client, with support #hashtag searching and picture-in-picture views, with the app picking up trending shows and topics. Whether or not we’d actually use a Twitter client on our living room screens is another matter when it’s so easy to tap away on a laptop or phone, but the picture-in-picture view with a Twitter feed side-by-side a live TV show could prove amusing for “social” shows such as X-Factor.

Which leaves of course price. Due out in the summer, Toshiba aren’t yet revealing how much the Series 9 sets are going to sell for. But considering Sony’s comparably sized 4K screen is set to sell in the region of £22,000, don’t expect Toshiba’s 84-inch offering to come much cheaper.