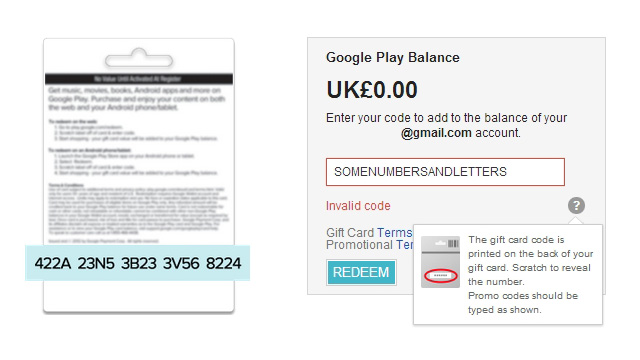 The US has been enjoying pre-paid Android Play app store gift cards for some time now, but UK Android owners have only been given a whiff of a useless “redeem” page to date, with no actual gift cards to redeem on it.

It looks however as though that’s about to change. Android Authority has been trawling the Google support pages, where they’ve found mention of UK prices.

It seems that we’ll soon be able to buy £10, £25 and £50 gift cards for the Android Play store, which can be redeemed on app, music, eBook and movie purchases.

Though there’s still no set release date, the launch can’t come soon enough. Apple’s App Store and iTunes gift cards have been littering the gift card racks of supermarkets for years. Gift cards would be another great way that Google could assert Android as a mainstream, app-centric platform to casual UK users, as well as nabbing a few quid from less tech-savvy grannies out to buy birthday gifts for the grandkids.

That said, Nan, if you’re reading, I’d still just prefer the cash, thanks.