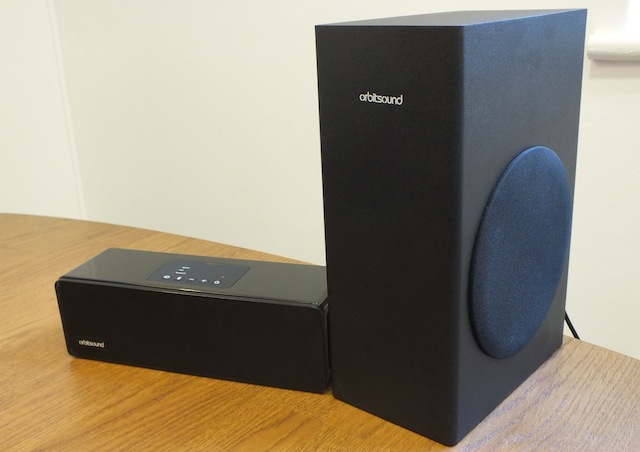 Orbitsound pop wireless Bluetooth streaming into the new M9 soundbar, just one of many new improvements made to the company’s already-excellent soundbar range. But can the tweaks and new features of the M9 justify a price tag 50% more expensive than its predecessor? Read on to find out!

Orbitsound blew us away last year with their diminutive T9 soundbar, which achieved a perfect score in our review. A compact speaker unit that was just as well suited to supporting a home cinema set up as it was blasting out your favourite tunes from its iPod dock, it was a real bargain at £199. Orbitsound has now followed it up with the new-and-improved M9 speaker, which irons out the few kinks that were present in the T9 whilst adding a few brand new features too.

Pairing both a soundbar and subwoofer together again, at first glance the M9 looks very similar to its T9 predecessor. Only marginally bigger at 300mm x 90mm x 100mm for the soundbar and 345mm x 140mm x 230 mm for the subwoofer, it’s again an all-black finish (gloss on the soundbar, matte on the subwoofer), with a pop-off front metal grille exposing the soundbar’s speakers if you prefer. Though pre-production units don’t have it, the M9 will ship with an LED light behind the grille to help indicate power state and remote control inputs.

However, there’s a significant and notable difference with the M9. The new model has ditched the T9’s iPod dock in favour of a wireless Bluetooth connection. This means that any device with a Bluetooth connection can quickly be paired with the M9 and stream audio wirelessly to it. While the T9 was great for iPhones and iPods thanks to its dock, users of other smartphones or MP3 devices had to make do with the 3.5mm jack. Though that 3.5mm port is still present, Bluetooth support makes the M9 far more flexible overall, especially for tablet users.

On top instead of the dock then is a new control panel, with buttons which let you switch audio sources (the active source is indicated by a light next to its name), activate Bluetooth pairing, control volume and put the soundbar into standby mode.

If Bluetooth streaming isn’t an option for you, Orbitsound still squeeze in a number of other connections on the rear of the M9 soundbar, including optical, AUX and the aforementioned 3.5mm. That optical port will be useful for anyone looking to hook up a digital audio source such as a Blu-ray player, but we still miss the presence of a HDMI pass-through. You’ll also find a power switch on the back.

Likewise, the subwoofer is now a 2.4GHz wireless unit too (aside from its power cable, of course), meaning it can be popped anywhere in a room. It’s also now an active side-firing subwoofer unit compared to the T9’s passive sub, giving it a bit more oomph than its predecessor and a more stable sound at higher volume levels. With the wireless support allowing the subwoofer to sit around 15 metres from the M9 soundbar, Orbitsound have sensibly put an independent volume knob on the back of the subwoofer, letting you tweak its output to be appropriate to its surroundings and distance from the soundbar. A “normal” setting is marked too however, which should be suitable for most scenarios, though we wish the dial had this off-centre point notched so that we could find it without having to get behind the subwoofer. There’s also an independent power switch for the subwoofer on the back too. 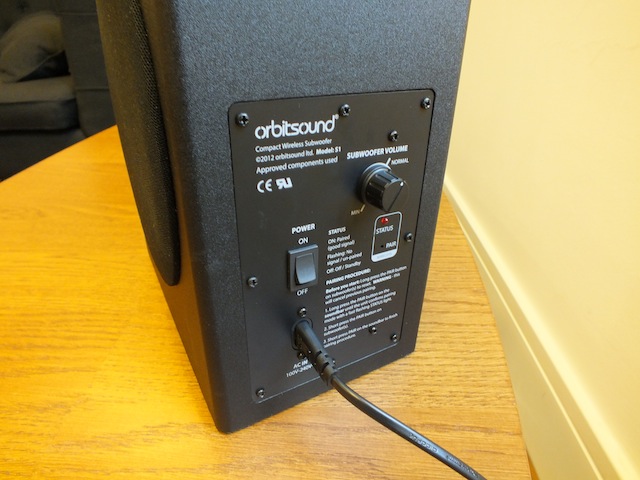 Even the remote control is improved, feeling weightier than its predecessor, and offering track selection controls and play/pause control over connected Bluetooth devices. We still find the buttons themselves a little cheap, and would rather had a remote that matches the feel of the soundbar’s new top-mounted control panel, but it’s still better than what went before.

There are a handful of other improvements over the T9 too. The M9 now saves fine-tuned audio tweaks to treble and bass settings (carried out by the remote control) when the power is switched off, something the T9 annoyingly didn’t. Also, if you’ve been blasting out tunes for a party at a ridiculous volume the night before, the M9 will now sensibly dial back the volume to a more gentle level the next time its switched on. It’ll even go into a low-power standby mode automatically if it’s left switched on for a time without outputting any sound. 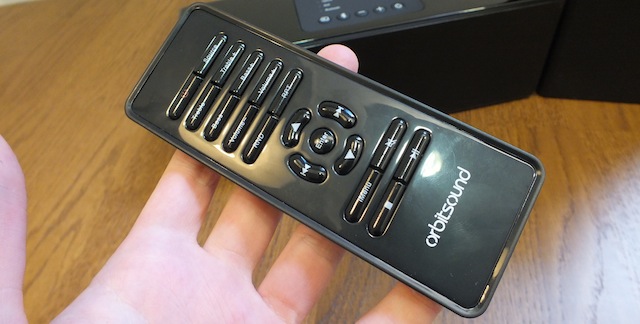 Sonically, the M9 continues to impress. Like its predecessor it is able to hit ridiculously high volumes regardless of its compact size. Packing in twin 2.5-inch mid-high drivers, two full range “spacial generators” (we’ll talk about them in a second), a single 1-inch tweeter and a new digital amp capable of 200W output, it uses new programming to reduce distortion even at the highest volume levels. Also, despite being wireless, the use of high-gain antennas mean there’s next to no delay, with the soundbar and subwoofer staying in sync between an inaudible 10ms delay. The sub’s 6.5-inch driver also delivers meaty low levels, staying composed even at higher volumes.

The Orbitsound brand’s key audio draw though is its patented Spatial Stereo technology, again present in the M9. As well as speakers housed in the soundbar facing forwards, there are two more “spatial generators” placed in the sides pointing left and right. Along with some clever audio processing, they give the effect of a stereo sound no mater where you are in relation to the soundbar. It’s a system we’ve praised in the past, and it continues to impress here. 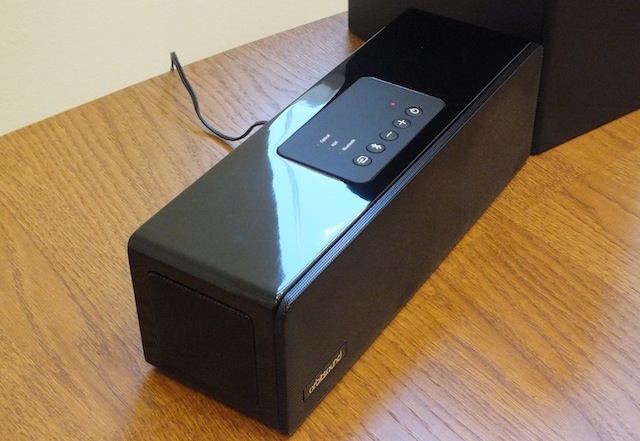 Listening to a range of music, the Orbitsound M9 handles all genres magnificently. From the crashing drums of …And You Will Know Us By The Trail of Dead’s ‘Worlds Apart’ album to the shimmery electro of Crystal Castles and onto the subtle piano runs of Debussy, it’s a warm, evenly balanced sound with detailed highs and comfortable, enveloping lows. If you prefer a little more bass or more treble, the hardware knob on the back of the subwoofer and fine-tuning tweaks offered by the remote will suit your needs well. It’s also a great unit for beefing up TV and movie output. That subwoofer adds some real punch to explosive action scenes, while voices sit clearly at the front.

Orbitsound continue to impress with the M9 soundbar. Wireless technologies are implemented well, while numerous other small improvements over last year’s T9 model, including saved audio preferences and an improved remote, along with the consistently superb Spatial Stereo technology, make it easy to recommend. Its significantly higher price tag of £299 (£100 more expensive than the T9 launched at), means that the outgoing T9 isn’t made obsolete yet, and will likely now drop to bargain prices. However, the convenience and flexibility of a Bluetooth connection will certainly make the new M9 highly sought after, and it’d still be £299 well spent when compared to the competition.