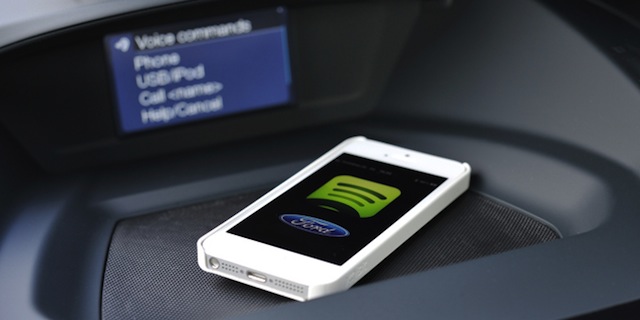 Ford have used MWC 2013 as the platform to announce that they will be adding Spotify music streaming to their in-car Ford SYNC AppLink connected dashboard service.

The new EcoSport for European territories will be one of the first cars to get the new features when the SUV goes on sale later this year.

SYNC AppLink opens up a whole new world of content to Ford customers that they can access on the move by voice control while keeping their hands on the wheel and their eyes on the road,” said Paul Mascarenas, Ford chief technical officer and vice president, Research and Innovation.

“As one of the World’s most popular music streaming services, Spotify is the perfect partner to demonstrate the benefits of the Ford SYNC AppLink system.”

“Our partnership with Ford AppLink will enable music-loving drivers to enjoy access to Spotify’s huge catalogue of more than 20 million tracks safely, while on the road,” said Pascal de Mul, global head of hardware partnerships, Spotify.

Ford expect their connected dashboard features to be in 3.5 million European Ford cars be 2015.