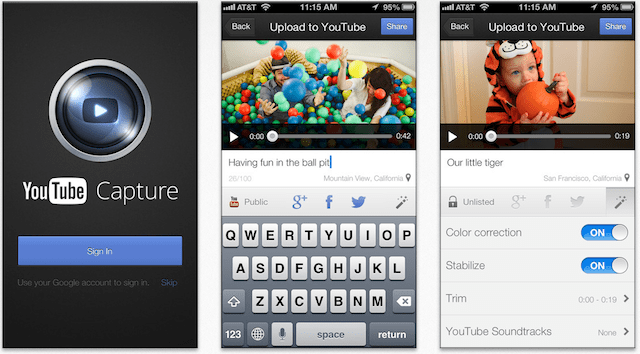 See that hilarious video of your cat with its head stuck in a treat box that you posted online yesterday using the YouTube Capture iOS app? Remember how you could only push it to YouTube in lowly 720p resolution? If only you’d waited a day! We all could have pointed and laughed at Mr Snuffles in 1080p HD resolution, as the YouTube Capture app has today been updated to support 1920 x 1080 resolution uploads.

YouTube capture allows a user to quickly record video clips and publish them to YouTube in-app, with tools to touch up clips, add video stabilisation for shaky shots, trim videos and add music tracks. The closest app we’ve got to an “Instagram for video”, the YouTube Capture update is compatible with the latest HD camera-packing iPod touch models, as well as iPhones. There’s still no Android version however.

YouTube Capture’s update comes in the wake of Twitter’s move into the video sharing realm, following yesterday’s launch of their Vine app.