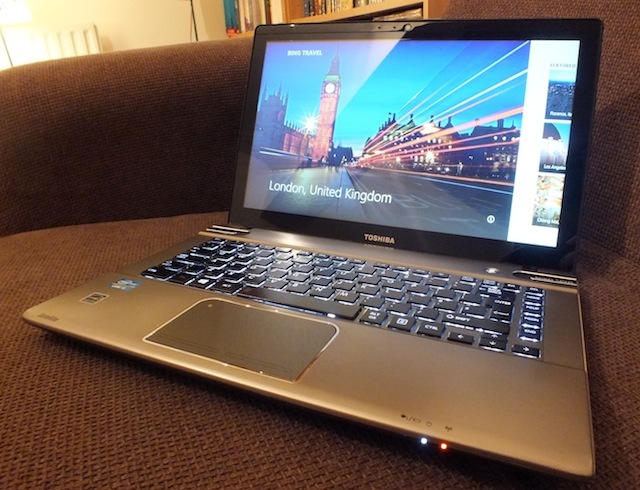 The Windows 8 revolution is in full swing, with every laptop manufacturer worth their salt putting out touchscreen-packing laptops. Toshiba’s Satellite P845t-101 is one of the first to hit the market, offering a 10-point touchscreen display alongside a traditional laptop form-factor. But is it a comfortable feature to use, and is it worth the extra price premium? Read on to find out!

Toshiba’s Satellite P845t-101 sits at the premium end of mid-range machines from Toshiba. Packing in a Core i5-3317U processor clocked at 1.7GHz (2.6GHz with Turbo Boost), it houses 6GB of RAM, using Intel’s HD Graphics 4000 rather than a discrete graphics chip. It’s a comfortably powerful laptop that jumps through the Windows 8 modern UI tile interface (or “Metro” if you prefer) with ease, handling multiple simultaneous video streams, general office functions and casual gaming without a stutter, but those looking to do any substantial 3D gaming or big video editing projects will quickly cause it to buckle. 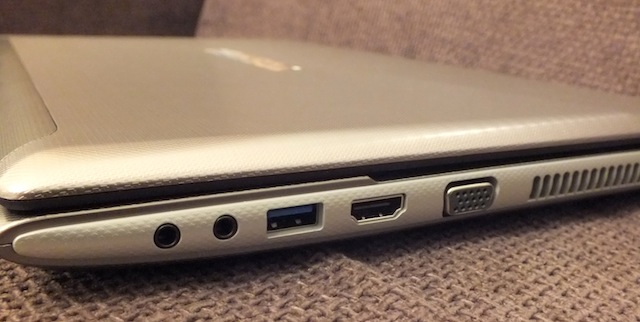 The slight premium in price is accounted for with a 14-inch capacitive touchscreen display capable of taking in 10 simultaneous points of touch input. Though we’ve been skeptical of touchscreen laptops in the past, the experience we had with the Satellite P845t-101 was a surprisingly pleasant one. Responsive to the touch, with the internal hardware more than up to the task of processing our actions lag-free, we found ourselves using the touchscreen far more than we had expected to. Indeed, some of the quirkier, more troublesome gestures and UI elements of the Windows 8 operating system are more easily overlooked when touch control is involved, and as such the hybrid pairing of physical and touchscreen controls certainly seems the best way to enjoy Microsoft’s latest OS in our opinion. It also makes the laptop a little more accessible for the less tech-y out there; pre-installed games like Cut the Rope and Doodle God were just as enjoyable on the laptop as they would be on an iPad or comparable tablet device.

It’s not perfect though. For starters, Toshiba’s 16:9 panel runs at a lowly 1366 x 768 resolution, the bare minimum we’d find acceptable in a portable machine these days. It’s a bright screen, but viewing angles are tight and colours feel generally washed out. However, its glossy coating does well to avoid picking up too many unsightly finger marks, something that will be a challenge for touchscreen laptop manufacturers going forward. 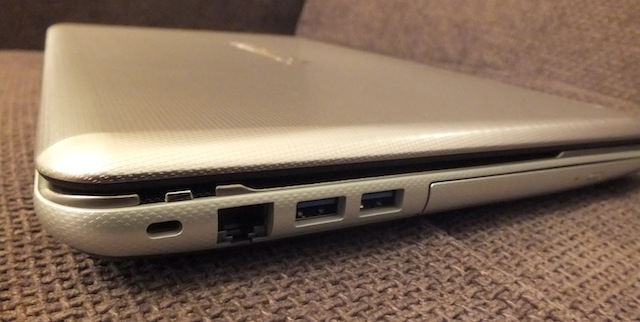 The laptop itself is reasonably attractive, with a textured chrome finish used throughout, but eschews the ultra-slim trend currently in vogue. Measuring 349x234x29mm and weighing roughly 2KG, it’s a chunky machine that will feel burdensome on an extended journey. The extra heft does allow for a decent array of ports to be included though, with a generous 3 USB 3.0 ports onboard, alongside an Ethernet port, a HDMI-out and headphone jack, as well as the option of hooking up an external monitor. You also get a DVD drive (a dying breed), which suffers from using a tiny, finicky eject button – you’ll too often find yourself fruitlessly pushing against the inner spring mechanism rather than hitting the button itself.

We also noticed a slight gap between the keyboard and screen lid when the laptop was closed, something that could lead to screen damage if something were to slide between the two sections when stored away in a bag. 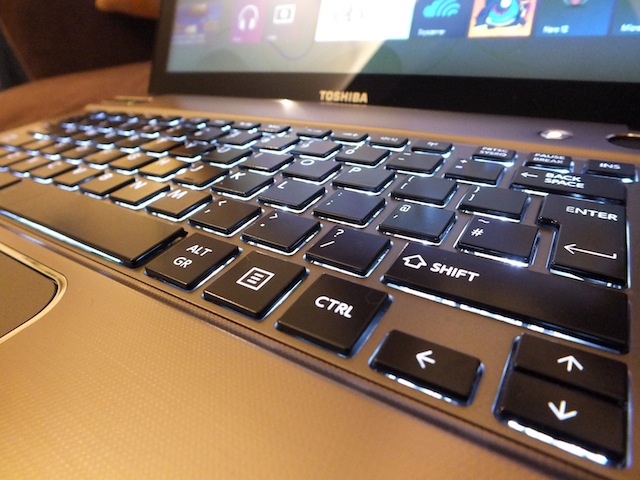 The keyboard is comfortable to use over extended periods. Keys are a nice size with good travel, and are gently backlit for late-night sessions. The glossy finish however can make them feel a little sticky under your fingertips, but on the whole its one of the better laptop keyboards we’ve used recently. There’s no numberpad, but a selection of media shortcut keys are useful for movie watching or skipping through playlist tracks. 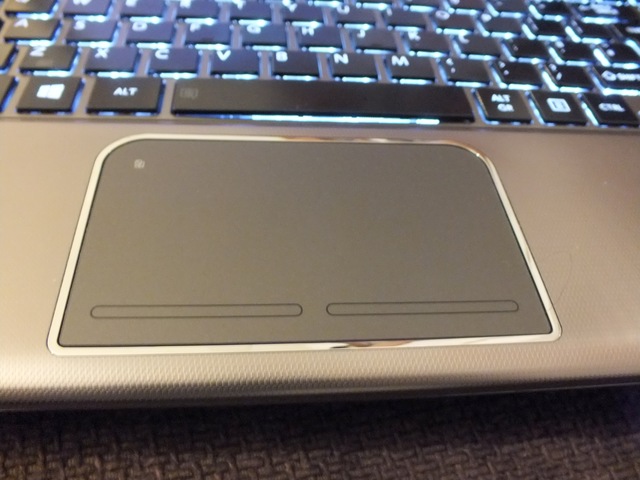 A large single button trackpad (designating left and right mouse clicks to either side of the pad) is included, with a smooth finish that was lovely to use. Windows 8 gestures were easy to trigger (perhaps a little too easy). It’s worth noting though that, if you do find yourself regularly using the touchscreen, you’ll likely find yourself brushing the trackpad and triggering unwanted input – an unavoidable side-effect of this form factor unless some sort of proximity sensor is implemented. 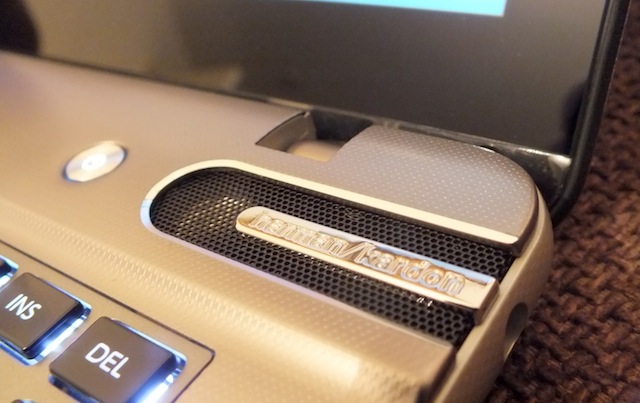 Just above the keyboard below the screen’s right edge sits a small, circular backlit power button, and below that on either side of the keyboard is the stereo speakers, here provided by Harman Kardon. They’re a cut above most laptop speakers, especially in comparison to slimline ultrabooks. They crank up surprisingly loudly, suffering only from an exaggerated bass and loss of detail in the mid ranges.

A regular HDD, rather than SSD or hybrid storage solution, is onboard, offering up 640GB of storage space. It’s a decent amount of space, but Toshiba have popped a fair amount of bloatware on here, including McAfee virus protection, the Wildtangent games hub, Toshiba’s own Video Player, as well as Amazon, eBay and Netflix apps. While the last three are likely to be of use to most users, they won’t be for everyone, and should not be forced on them. The lack of an SSD drive or hybrid alternative also makes for lengthy boot times; you’re looking at on average a 45 second wait from a cold boot.

Battery life was more impressive however. With the moderate strain of continuous video streaming at full brightness, we squeezed over 3 and a half hours out of the battery from a single charge. Being a chunky machine, its likely the laptop will be tied to a wall socket and desktop for most of its life, but it’s good to know you’d just about get through all of Lawrence of Arabia should the mood take you. The laptop managed to maintain a comfortably low heat too, with only a low (if regular) whirring sound kicking in when the computer started to heat up.

It’s a solid start to touchscreen Windows 8 laptops for Toshiba then. The Satellite P845t-101 handles touch input with ease, and you’ll find yourself perhaps surprised at how often you’ll be swiping away at the screen. The build of the laptop itself leaves a bit to be desired, as does the visual quality of the display, but overall the Satellite P845t-101 is worthy of its slight premium over similarly spec’d machines.